National Night Out coming in September 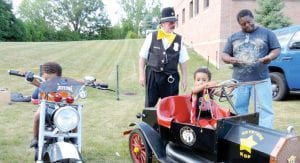 Trying on police gear, run rides and a free bike giveaways were part of the fun for kids attending last year’s NNO, which drew the biggest crowd ever.

FLINT TWP. — Most areas of the country participated in the 33rd annual National Night Out event on Tuesday, August 2, but hold on – the local annual event, hosted by the Flint Township Police Department, is being planned for Tuesday, September 13 from 4:30-7:30 p.m. at the police station on Norko Drive.

A sleek video with details of the event is up and running on the township website at www.flinttownship.org

According to the narrative, the township police department has hosted the annual event for nearly ten years.

“National Night Out is celebrated across the country with the goal of reaching the community to develop and foster relationships between public safety and our citizens we serve,” said the video’s narrator.

Flint Township police sponsor the event in cooperation with other local agencies including the Mundy/Swartz Creek police and fire departments and Target Corporation.

In addition to canine and public safety equipment demonstrations, the event will include several vendors with free giveaways.

National Night Out organizers expect to hold more than 16,000 community events around the country this year, according to information on its web site at natw.org/

“For more than 30 years, National Night Out has helped to prevent crime, strengthen community-police relationships, and empower neighborhoods across the United States,” said U.S. Attorney General Loretta E. Lynch, who was a special guest speaker at the Detroit NNO events held this week. “By giving law enforcement and local residents a chance to gather in a positive and supportive environment, National Night Out forges the bonds of trust that are so essential to the creation of stronger, safer, and more united communities where every American can flourish.

NNO was established in 1984 with a grant from the Department of Justice Bureau of Justice Assistance (BJA).