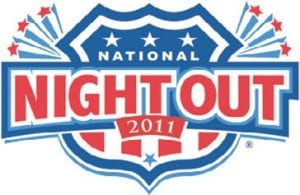 Leader pups for the blind; and free food and drinks.

Nationwide, its the 28th anniversary for the annual National Night Out, a crime/drug prevention event sponsored by the National Association of Town Watch (NATW).

The official NNO is Aug. 2 but the township event was moved to avoid conflict with elections day, said Lt. Tim Jones. event coordinator.

NNO aims to heighten crime awareness; generate support for local anticrime programs; strengthen neighborhood spirit and police-community partnerships; and send a message to criminals that neighborhoods are organized and fighting back.

Along with the traditional display of outdoor lights and front porch vigils, cities, towns and neighborhoods celebrate NNO with a variety of events and activities such as block parties, cookouts, visits from local police and sheriff departments, parades, exhibits, flashlight walks, contests, and youth programs.