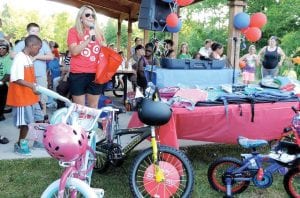 Natalie Nagy of the Target Corporation gave away several backpacks, remote cars and the coveted bicycles.

“We are very pleased with the turnout,’’ said Police Chief George Sippert. “We were hopeful when we partnered with Swartz Creek and Mundy Township (police departments) that we would get more residents.”

Participations of business vendors also increased this year, he said.

“We hope to keep building on it. It is a time when the entire community can come together and help nurture partnerships and relationships with police officers,” Chief Sippert said.

Target underwrote expenses for the eighth year at the police station event but has supported NNO since its inception in 1981, said Natalie Nagy, who oversees the law enforcement protection group and human resources at the Miller Road Target store. 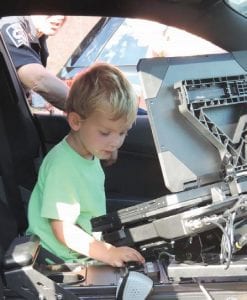 Maverik Tafoya of Flushing checked out the controls inside a Swartz Creek police car.

“Target is a proud partner and we are always happy to give back,” she said.

Mundy Township Officer Randy Gage, who is the community resource officer at Carman-Ainsworth Middle School, also was there handing out coloring books, safety sticker badges and literature about bicycle safety, Internet safety, walking home safely and tips on being at home alone.

“Whenever I see children, I like to give them items to remember me by, with a smile, that police officers are your friends and helpers,” he said. 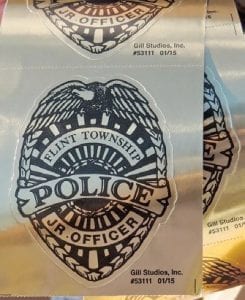 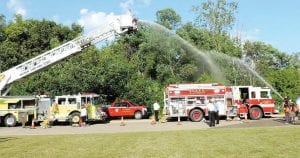 Fire trucks displayed their water hose capabilities, giving anyone standing to close an impromptu shower. National Night Out activities were held at the Flint Township Police Department in partnership with the Swartz Creek and Mundy Township police and fire departments. 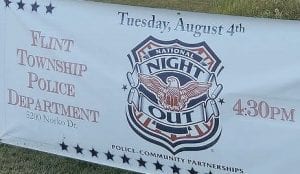