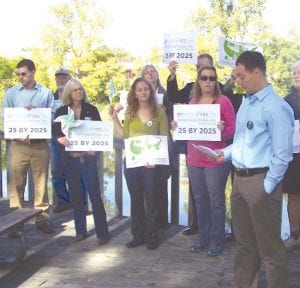 Members of the Sierra Club held a rally this week in support of Proposal 3 at the Flint Farmer’s Market.

FLINT — Michigan Energy Michigan Jobs, a bipartisan coalition of Michigan businesses, labor organizations, health care advocates and other groups that support Proposal 3, a ballot initiative to increase Michigan‘s renewable energy standard to 25 percent by 2025, announced the endorsement of Proposal 3 by several national and state environmental and conversation groups at a press conference in Flint on Oct. 1.

“Michigan is falling behind in the clean energy race while other states have seen job creation, economic activity and a reduction in dangerous pollution,” said Tom Nagle of the Sierra Club. “Proposal 3 is the perfect combination of creating good manufacturing jobs in Michigan and reducing dangerous pollution harming our air and water.”

Proposal 3 would require that 25 percent of Michigan’s electricity come from wind, solar, biomass or hydropower by 2025. More than 30 states have adopted measures similar to Michigan’s ballot initiative, including Illinois, Ohio and Iowa.

“Renewable energy is helping rein in high energy costs for other states, which is what Michigan needs,” said Alex Citron of the Michigan League of Conservation Voters.

Proposal 3 states that utilities cannot raise electricity prices related to the cost of generating renewable energy by any more than one percent per year.

Proposal 3 further urges the use of Michigan made equipment and the hiring of Michigan workers.

“We endorse Proposal 3 because it will create jobs and give Michigan cleaner, healthier air and water,” said James Clift of the Michigan Environmental Council. “Now is the time for Michigan to stop importing dirty coal from other states and start investing in a new clean energy industry