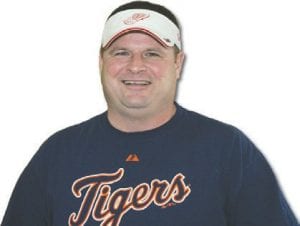 The month of March is upon us and that means it is March Madness time! Let the orange pumpkins be bounced on the hardwood. Let the tears of joy and pain roll down the faces of the players after the games are over. One Shining Moment is the theme of March. However, one team will win six straight games and be crowned National Champs for the 2013-14 college hoop season. Let’s look at the brackets and get some of my thoughts and predictions.

THE WEST bracket has number-one seeded Arizona and the number-two seed is Wisconsin.

When I look at Wisconsin it has a nice bracket draw to at least the Elite Eight. Oregon plays fast-paced hoops, but the Badgers will slow that down. It sure is nice to see Nebraska in as the 11-seed. The Cornhuskers play Baylor, a winnable game for them.

My sleeper team here is the Oklahoma State Cowboys. Oklahoma State has a seven-game losing streak in the middle of the season, but it has righted the ship of late. I also like Oklahoma if it doesn’t get upset by North Dakota State. Oklahoma loves shooting the three ball. Sweet Sixteen: Oklahoma State, San Diego State (Steve Fisher’s team ex-Michigan coach) Wisconsin, Creighton.

THE SOUTH bracket has number one seed Florida and number-two seed Kansas.

Florida has only lost two games all season. It is the favorite to win the whole tournament, in my opinion. A couple of sleeper selections, you ask? How about New Mexico, a very experienced basketball team. UCLA is another choice because it has played great basketball this last month of the season.

Can Syracuse regain its moxy it had earlier in the season? I don’t know, to be honest.

THE EAST bracket has number one seed Virginia and the number-two is Villanova. Virginia is the best team in the tournament that nobody knows about. Trust me on that. Quick — name one player? Didn’t think you could. Virginia is the best defensive team in the tournament. I love watching them play. Iowa State can shoot the rock, but plays zero defense. Saint Joe’s is red hot so keep them on your Sleeper Alert team.

The Spartans are a number-four seed? That’s the biggest seeding blunder ever. Did they legalize smoke in the NCAA selection board room? Just wondering.

Michigan State has a potential trouble game with Cincinnati if it defeats Harvard. The Bearcats play tough hard-nosed defense and are a mirror image of the Spartans. The difference is MSU can score and the Bearcats struggle offensively. Never count out the U-Conn Huskies either. They always play well in the tourney. North Carolina might be too young yet to make a run. Sweet Sixteen: Virginia, Michigan State, Iowa State, and Saint Joe’s (my upset special with the Hawks).

This is by far the toughest bracket, in my opinion. Seriously, the Louisville Cardinals are a number-four seed? Put down the pipe, selection board. Louisville is the second-worst seeding blunder ever.

Can the St. Louis Billikens make a run with all that senior experience? I like them as a sleeper in this bracket. Duke is always dangerous come tournament time. How about a possible Duke and Michigan matchup in the Sweet Sixteen?

Kentucky as an eight seed? Kentucky was the pre-season number-one team. I think Kansas State knocks them off, to be honest. The SEC Conference was horrible. Can the Wolverines make the finals again this year? I say more than likely, not. This is where they will miss the big man, Mitch McGary.