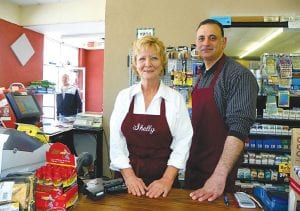 FLINT TWP. — Shelly Cunningham welcomes the reopening of a neighborhood supermarket at Maple and Van Slyke roads and not only because she works there as a cashier.

Cunningham lives nearby and said having the store there means that area residents no longer need to drive further away to Walmart or Meijer to buy a loaf of bread or a gallon of milk.

Besides that, the building at 4508 Van Slyke sat vacant for a long time but is now an asset to the community, she said.

Cunningham is one of two cashiers at the Michigan Food Market which opened about a month ago,

Norm Nannoshi, manager, has been in the grocery store business for many years in the Flint and Detroit areas. His family owns the building and after renting it out for other purposes, most recently a poker hall, decided to return to its roots.

The store stocks a wide variety of products including pet food, fresh produce and cleaning products. It has a lottery machine and plans to accept EBT cards. The store also stocks a wide variety of Michigan beers and plans to specialize in Michigan-made products including dairy, Nannoshi said. He still is in the process of contacting Michigan food manufacturers to offer their products.

Pizza rolls and ham rolls are two of the most popular items, Nannoshi said.

Nannoshi said his wares are priced to compete with the big chains. He sells a gallon of milk below cost and a case of Absopure bottled water is $2.99.

He also sells freshly cut meats at competitive prices such as $3.99 for a whole rib eye steak.

“We cut it up the way they like it,’’ said Nannoshi, who has worked as a meat cutter for many years.

Cunning added that they grind their own hamburgers with no additives.

“I am going to try to stay affordable,’’ Nannoshi said. “I can’t compete with the big guys on everything but have been so far.”

He also hopes to hire more workers as business picks up. A grand opening will be planned later when everything is in place like Nannoshi wants it.

The 5,500 square-foot store did not need much more than a fresh coat of paint and new fixtures to set up because it had been a grocery store before.

Efforts also have been made to spruce up the outside including clearing away overgrown brush at the rear of the parking lot where Nannoshi said he would like to place picnic tables for patrons.