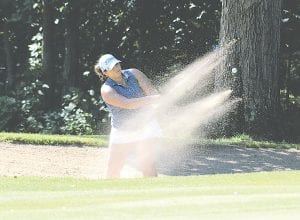 Davison’s Kamryn Johnston chips out of the bunker during a FJGA event last summer. Photo by Austin VanDaele

LINDEN — Flint Junior golfers in the Jack Nicklaus group were out in full swing during Week Five action at Spring Meadows Country Club in Linden Monday. Flushing’s Andrew Nestor and Davison’s Kamryn Johnston recorded the low scores for the boys’ and girls’ divisions, respectively. Nestor finished with a 75 on the day while Johnston carded a 76.

On the girls’ side, other top finishers included Lapeer’s Brooke Gibbons with a 78, Davison’s Isabel Mabry with an 81 and Keegan Miller with an 84. Brook Herbstreit carded an 87, Kearsley’s Grace Hoffman finished with an 88, Swartz Creek’s Skyler Henry had an 89 and Grand Blanc’s Morgan Swett turned in a 91. Caylee Ries of Davison and Neeley Peterson of Swartz Creek both finished with 92s and Goodrich’s Elizabeth Gibbs carded a 93.

Next Monday, the Jack Nicklaus group will head to Davison for the final event of the season before the FJGA’s season-ending, three-day final tournament held August 6-8. For full results and to see the upcoming schedule, visit www.fjga.org.