New builds on Miller on a roll 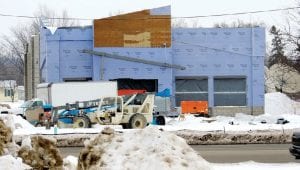 Construction is well under way on a new Eyeglass World Superstore, which will be the second completely new build on Miller Road within the past six months.

FLINT TWP. — Fresh off an early December completion of the new Panera Bread Bakery & Cafe at 4477 Miller Road, construction crews moved in next door to begin work on another completely new build.

This one will be serving up a different type of menu. It is the future site of an Eyeglass World superstore, a national vendor with about 10 locations in Michigan and more than 70 stores nationwide, according to information posted on the corporate web site.

Doing business for more than 20 years, the chain is known for its affordable two pairs for one-price deals including designer frames. Eyeglass World stores operate on-site labs that in most cases can provide same-day service.

No opening date or hiring information is available yet but job openings for a general manager, assistant manager and sales associates are posted under careers on the company web site at www.eyeglassworld.com/

The Panera and Eyeglass World sites were formerly occupied by Eddie’s Amusement Co., which was razed last year to make way for the new developments.