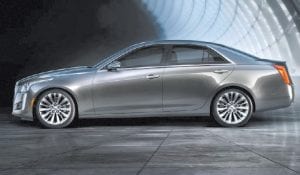 The third-generation CTS sedan is based on the high-performing rear-drive architecture of the ATS sport sedan, moving Cadillac into the prestigious class of midsize luxury sedans. It will be the segment’s lightest car. A range of power trains will be available in the car, including the all-new Cadillac Twin-Turbo engine and eight-speed automatic transmission.