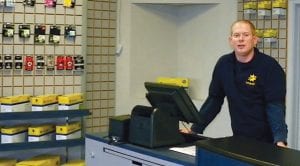 FLINT TWP. — Probably the one thing more irksome than a printer running low on ink is having to go out and buy more, which often costs more than the printer itself.

Having no choice but to buy more ink, more and more customers are turning to providers like Cartridge World for an alternative that saves money and is more environmentally friendly.

That is the service plan for the newest Cartridge World store that opened October 18 at 2119 Linden Road in the Lincor Plaza.

Besides two jobs openings to fill, the store offers ink and toner refills as a less expensive option to customers.

Cartridge World began about 20 years ago in Australia and came to the United States in 2003, said Voll.

“We help people save money and keep cartridges out of land fills,” she said, adding that the company bills itself as the world leader in printer cartridge refilling.

“We have grown as fast as Starbucks,’’ Voll said of the 700 stores now operating nationwide including about 45 in Michigan and Ohio. An established franchise in Grand Blanc is separate from the new one in Flint Township.

Voll said that Provencher also will be working to set up recycling programs with local businesses and schools. Services include free deliveries to business customers.

The store also sells office supplies and will be offering printer repairs in the future.

Provencher, 33, said he learned about Cartridge World franchises from a fellow member of the BNI networking group in Saginaw who operates four stores in the tricities.

“I watched his business and liked what I saw as potential for growth and success,’’ Provencher said.

It’s a win-win for him and his customers, he said.