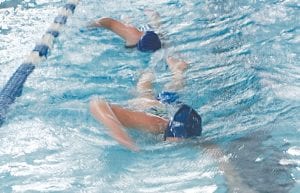 Carman-Ainsworth swimmers are learning the strokes under a new coach this year.

FLINT TWP.
— Jessica Kennedy is just getting her feet wet with the Carman-Ainsworth girls’ swim team, but the new coach knows where she wants to take the program.

Kennedy was hired just a few weeks ago in her first varsity head coaching position. She swam at Brandon High and was on the rowing team at Grand Valley State University, where she earned a degree in exercise science. She was an assistant with the Brandon swim team last year.

“I love doing this, I love working with the girls,” Kennedy said. “We did time trials last week to give me a basic idea of where they are conditioning wise and who can swim what strokes.”

Kennedy has a roster of 28 girls to work with, which is not a large number, but enough to fill a lineup.

“It’s not a huge amount, but we can definitely fill all the events,” she said. “That’s why I push them so hard in conditioning, because I have to have them swim four events.”

Kennedy has some returning experi- ence in diver Paige Conway, 200- meter individual medley specialist Kaylee VanFleet and breaststroker Alison Stemczynski. All are seniors and will serve as the Lady Cavaliers’ three captains.

Among the newcomers, freshman Kayla Seeley shows “really good potential” in the 500 freestyle, and sophomore Allia Howard is being eyed for the 100 and 50 freestyles.

The best part for Kennedy is that most of the swimmers should return next year. The only seniors are the three captains.

“It definitely helps having a young crowd,” she said. “I told the girls this is a big building year for us. If we win, great, but I’m mainly looking for who I can keep for four years and build up from there.”