Crossroads Village gearing up for season after 2020 shutdown 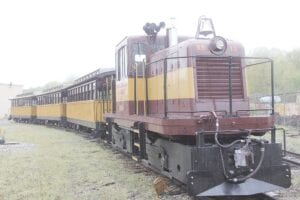 GENESEE TWP. — What a better way to reopen Crossroads Village & the Huckleberry Railroad after being closed due to the pandemic than with the addition of a new piece of history.

Engine # 7 was traded as part of the purchase of the newly rebuilt Engine #12 and, according to Hollie D. Marlett, parks communications specialist. The engine faithfully served Huckleberry Road since its purchase in 1990. It is currently on its way to its new home in California.

Engine #12 is a 3-foot Narrow Gage and boasts two Detroit Diesel 671 engines. It was rebuilt by McHugh Locomotive in Fairless Hills, PA.

The rebuild was officially completed on April 24 and the journey to its new home began on April 27. The engine arrived April 29.

Mick Kimball, a member of the railroad staff, said the park will run the diesel engine Thursdays and Fridays and the steam engine Saturdays and Sundays.

When Engine #7 began to show signs of age, Kimball said there were only two options going forward.

“We either needed to rebuild the engine,” he said, “or get a new one.”

Barry June, the director of the Genesee County Parks & Recreation Commission, said the park knew Engine #7’s days with the railroad were coming to an end and they were prepared for its replacement.

“We knew locomotive number 7 was getting tired, so we solicited bids for a new or rebuilt locomotive and McHugh was the only company that came in with a satisfactory proposal,” said June. “We expect this locomotive to be in service at least as long as the last one – 30 years plus.”

A press release said McHugh Locomotive & Equipment is a rebuilder of historic rail equipment including diesel and steam locomotives, trolleys, and railcars.

The 50-ton center-cab locomotive was built in the 1950s by General Electric for the Bethlehem Steel Company and operated at a steel mill in Los Angeles, California as their unit #12. The locomotive was acquired by the tourist hauling Roaring Camp & Big Trees RR in Felton, California and then the Colorado-based scenic railway, the Georgetown Loop Railroad in Silver Plume, Colorado.

“The finished product turned out by the incredibly talented and capable McHugh Locomotive staff is a locomotive rebuilt to better than new standards,” said the release from McHugh. “Because of his passion for railroad history, J.C. McHugh, owner of McHugh Locomotive & Equipment, donated many extras to help with the overall cost and provide the Huckleberry Railroad with a better finished product.”

Marlett said the new engine was paid for out of a fund the parks and recreation committee maintain for its trains and was not taken from millage or grant money. The trade of Engine #7 was also part of the transaction.

June said he expects Diesel Electric #12 will give the Huckleberry Railroad reliable motive power for many years to come.

“This will ensure our ability to provide service to our customers at all times regardless of any conditions that preclude us from using our steam locomotives,” he said. “This locomotive is the key to us running a successful railroad tourist operation for years to come.”

Marlett said the park will reopen for the season on Memorial Day weekend (May 29-31) after spending most of 2020 closed due to COVID-19.

Social distancing guidelines will be in effect and there will be limits on the number of people inside the historic buildings and on the train. Masks will also be required of park guests.

“This summer we have everything planned as normal, with some new events coming too,” she said. “We’re hoping everything goes back to normal, we’re keeping our fingers crossed. It was such a huge let down for so many people because people have traditions, they come here every year.”