BURTON — Loki was the first dog to step through the gate at the new Burton Dog Park on Saturday.

Once unleashed, the boxer/ Rhodesian Ridgeback mix wasted no time, frolicking in the wide-open space, freely and safely.

“I love watching him hit his stride,” said owner Christine Hart of Flint.

About 25 dogs and their owners attended the dedication ceremony Saturday at Our Risen Lord Lutheran Church.

“We are excited to have a place for dogs and their families to socialize with other dogs,” said Kris Johns, member of the Friends of the Burton Dog Park. “Burton dogs now join the ranks of pups in other communities across Genesee County with dog parks. Our community’s dogs finally have a place of their own to run and play.”

Burton Councilman Greg Fenner credited Johns with doing the yeoman’s work in getting the park up and running.

“He did the footwork,” Fenner said of Johns. “He had the drive and the desire to get this going. He is the most instrumental guy here.” 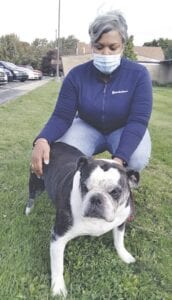 Sadie, with owner Kim Robbins of Flint, patiently awaits the grand opening of the new dog park in Burton.

Fenner also thanked the church for donating the land.

“They opened their hearts and minds and souls to the people and dogs of Burton,” he said.

The park was fully funded through private donations.

As part of the dedication ceremony, The Rev. Susan Lidums of Our Risen Lord offered individual blessings of the dogs. 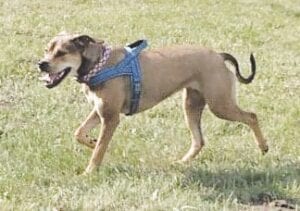 Loki was off and running, checking out the grounds of the new park.