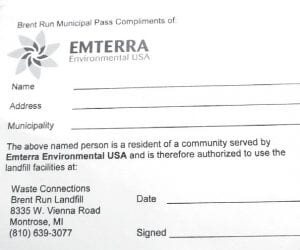 A Municipal Pass (front and back shown) is now needed for dumping at the landfill.

Dumping privileges are provided by Emterra Environmental, the township’s contracted waste collection service. Until recently, township residents could take a load to the landfill, once per month, as desired.

But due to a change in ownership, the municipal pass is now needed, Miller said. A driver’s license will not suffice as proof of residency.

“They have turned down a few residents,’’ Miller said of residents who visited the dump since the rules changed. The free Municipal pass can be picked up at the township hall, 1490 S. Dye Road, during business hours, 8 a.m. to 5:30 p.m. Monday through Thursday.

The 3×5 inch pass provided by Emterra is numbered and dated and identifies a resident by name, address and municipality. Effective immediately, new dumping guidelines at Brent Run include that the load weigh no more than 1,000 pounds. Anything over that weight will be charged at the gate rate. The passes are good for household trash and household demolition projects but cannot be used by third parties such as a contractor hired to do work at a resident’s home. 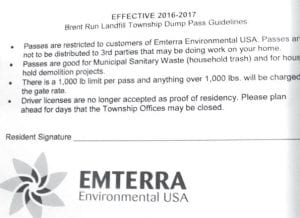 Miller said she has requested that Emterra notify all residents of the change in dumping privileges. Brent Run Residential Drop Off Hours are 7 a.m. to 3 p.m., Monday through Friday and 7 a.m. – 9:30 a.m. on Saturday. They are closed on major holidays: New Year’s Day, Memorial Day, Independence Day, Labor Day, Thanksgiving Day and Christmas Day.

Brent Run is located at 8335 Vienna Road in Montrose.