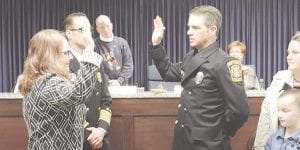 Surrounded by his wife, children and mother, newly promoted Captain Jason McClanahan was sworn in by Clerk Kathy Funk at the township board meeting Monday night.

FLINT TWP.— In a six to one vote, the township board approved the promotion of Jason McClanahan to fire captain. Of four candidates, he scored highest on a Civil Service Commission test.

McClanahan was present at the board meeting with this wife, children and mother who watched as he was sworn into office by Clerk Kathy Funk.

McClanahan graduated from Flint Southwestern Academy and attended the University of Michigan-Flint and Mott Community College where he earned an associate’s degree in fire protection technology,

Captain McClanahan has received additional training in the National Incident Management System, Rapid Intervention and Mayday and as a Community Safety Educator. He is certified in SCBA repair and has conducted vital maintenance and repairs for the fire department’s breathing equipment and air monitors. He has also been active in coordinating and conducting fire safety programs for the community.

The captain’s job opened up earlier this month following the retirement of Gary Borse, who served more than 35 years.

With Borse’s retirement, Chief Stadler said the department is in transition with new leadership and personnel. Part of that transition includes replacement of vital positions in the rank structure, he said Captain McClanahan’s position is vital because that person conducts fire inspections and oversees activities such as fire prevention and hose testing. The captain also provides command-level direction for emergency incidents and oversees the department when the Chief Officer is absent. Funding for the position is in the 2018 fire budget, Chief Stadler said.

Trustee Barb Vert cast the only dissenting vote to McClanahan’s promotion. She said she had nothing against him personally but continues to state her interest in pursuing consolidation ideas proposed by a Feasibility study commissioned by the board in 2012 to look at ways of joining forces with the fire departments in Swartz Creek and Mundy Township.

Trustee Tom Klee said he has known McClanahan since he started as an on-call firefighter and has been proud to watch him grow and mature.