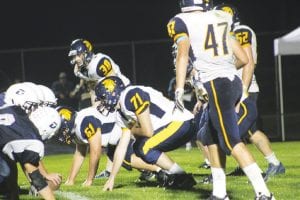 EAST LANSING — The first practices of 2014-15 begin next week for approximately 110,000 student-athletes taking part in eight sports in which the Michigan High School Athletic Association sponsors postseason tournaments, with nearly 41,000 football players practicing under a new policy in that sport aimed at continuing to improve player safety.

The new practice policy was proposed by a Football Task Force made up of coaches, administrators and MHSAA staff which met during 2012 and 2013, and approved by the MHSAA’s Representative Council at its Winter Meeting on March 21.

The modifications are meant to promote heat acclimatization and limit helmet-to-helmet contact during practices. They include:

During the first week of practice, only helmets are allowed the first two days, only shoulder pads may be added on the third and fourth days, and full pads may not be worn until the fifth day of team practice.

Before the first regular-season game, schools may not schedule more than one “collision” practice in a day. A collision practice is defined as one in which there is live, game-speed, player-versus-player contact in pads involving any number of players.

After the first regular-season game, teams may conduct no more than two collision practice days in any week, Monday through Sunday.

No single football practice may exceed three hours, and the total practice time for days with multiple practice sessions may not exceed five hours. Neither strength/weight training activities nor video/classroom sessions are considered practice for the purposes of the three or five-hour limits.

Previously, schools were required to conduct at least three days of practice without pads before beginning contact. The change to four days for gradual addition of pads was added to assist athletes in acclimating to being physically active in hot weather. Guidelines reducing the amount of collision practice go hand in hand with rules changes that have been made to reduce helmet-to-helmet contact in game situations. The policies in detail can be found on the Football page of the MHSAA Website. (Direct link: www.mhsaa.com/portals/0/documents/FB/practicepolicy. pdf)

“We think these new policies, with respect to the number of collision practices there can be before the first game, and after the first game, really are where 85 to 90 percent of our coaches already were,” said John E. “Jack” Roberts, executive director of the MHSAA. “This new policy sends a signal to that 10 to 15 percent to get on board with the rest of us to make football just as safe as it can possibly be.”

Practice in football must begin on August 11 for all schools wishing to begin regular-season games the weekend of August 28-30. Schools must have 12 days of preseason practice at all levels before their first game, and those 12 days of practice may not occur before 16 calendar days.

Continuing the focus on player safety, a number of rules changes were made in football for 2014:

Rules were added restricting targeting of opponent and illegal helmet contact with defenseless players, with both resulting in 15-yard penalties. Targeting is defined as taking aim at an opponent with the helmet, forearm, hand, fist, elbow or shoulder to initiate contact above the shoulders and with an intent beyond making a legal tackle or block, or playing the ball. A defenseless player can be considered one no longer involved in a play, a runner whose progress has been stopped, a player focused on receiving a kick or a receiver who has given up on an errant pass, or a player already on the ground.

Roughing-the-passer fouls now will result in an automatic first down in addition to the previous 15-yard penalty.

A number of significant rules changes will go into effect for other fall sports:

In cross country, the ban on wearing jewelry has been lifted (and also for track and field in the spring). The National Federation of State High School Associations deemed the ban unnecessary in these two sports because there is little risk of injury with minimal contact between competitors. Elimination of the rule will allow officials to further focus on the competition.

In soccer, Michigan has adopted the National Federation rule stating home teams must wear solid white jerseys and socks, with visiting teams in dark jerseys and socks (dark defined as any color contrasting white). Also, officials may now wear green and blue shirts in addition to red and black as alternates to the primary yellow shirt with black pinstripes.

In swimming and diving, one change affects the beginning of races and another impacts a specific event. The use of starter’s pistols is now prohibited; starters must use an alternative sounding device to start races. Additionally, in the backstroke, a swimmer may not submerge his or her entire body after the start except for during turns. The swimmer must remain on or above the water surface on the finish, eliminating the abuse of submerging well before touching the wall. This change also applies to the finish of the backstroke leg of the individual medley.

The 2014 Fall campaign culminates with postseason tournaments beginning with the Upper Peninsula Girls Tennis Finals the week of Sept. 29, and wraps up with the 11-Player Football Playoff Finals on Nov. 28-29.