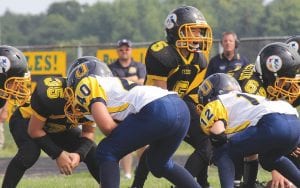 Heads Up! football teaches tackling using the shoulder rather than head first.

AREAWIDE— It is no secret that football can be a violent and dangerous sport, and with the recent emphasis on concussions, it leaves many to wonder what can be done to reverse such trends. Over the years, rules have been tweaked and equipment has been modified in an attempt to try to make the game a bit safer.

In a sport where collisions are inevitable, it makes it difficult to reduce injuries. However, recent studies show that those injuries, especially when it comes to head trauma, can be minimized with one simple adjustment: make tackles with your head up. The new Heads Up approach is quickly being administered to the teachings of youth football players across the country.

According to some coaches, however, the technique isn’t new by any means. “Actually, it’s not that new. I’ve been teaching (Heads Up) for the last 15 years,” said Lapeer Steelers youth football coach Doug Harris. “I’ve always taught my kids to keep their heads up.”

From the time football was invented, it has been quite common for coaches to teach their defenders to put their head down and drive with the shoulder. While that is a useful technique, it can also be dangerous on both ends. For the player making the tackle, they could easily injure their head or neck on any given play. It can also be hazardous for the ball carrier, as the hard shell of a helmet is often used as a but previously required advanced approval from the MHSAA.

• The Council approved a revision of the sections of the MHSAA Handbook addressing the sanctioning of meets conducted by non-school organizations or individuals and large interstate meets. They now reflect the requirements of the National Federation of State High School Associations, as well as previously unstated policies and procedures of the MHSAA.

In junior high/middle school matters, the Council revised the handbook so that schools may decide to allow student athletes in the seventh and eighth grades to be members of an interscholastic team in more than one sport at the same time; and to allow a student who will exceed the maximum age limit as a seventh or eighth grader to apply for “Eligibility Advancement” while in sixth grade to begin a maximum of two years of junior high/middle school participation.

Responding to situations where celebrations by student-athletes and spectators have resulted in property damage at MHSAA post-season tournaments, the Council approved the following language for inclusion in participating team and tournament managers materials addressing team and spectator conduct:

• During contests, officials will penalize under applicable sportsmanship or playing rules those studentathletes or coaches who leave the field of play and contact or approach spectator areas for celebration.

• Each tournament manager or the MHSAA Staff may determine an acceptable number of crowd supervisors necessary for each school, dependent on the situation, including inappropriate celebrations and other crowd control issues.

• The cost for repair of replacement to facilities damaged as a result of participant and/or spectator conduct shall be paid by the school involved directly to the host facility within 30 days of the bill being submitted to the school. MHSAA reimbursement or revenue sharing will be withheld until paid by the offending school. Future tournament hosting privileges or school reimbursements to offending schools may be withheld if payment is not made.

• In golf, the Council approved a committee recommendation to allow coaching contact for one designated coach during MHSAA tournament competition on all areas of the course, except when players reach the green. The school designated coach must be identified and approved by the school prior to the MHSAA tournament. Coaching privileges may not be transferred to persons not approved and designated by school administration. A committee recommendation to exempt one qualifying round of the Michigan Amateur Tournament from the limited team membership rule beginning in 2013, replacing the exemption approved in 2010 for the two U.S. Open qualifying stages, was adopted.

• In boys’ lacrosse, a committee recommendation to limit entry in the MHSAA post-season tournament beginning in 2013 to those schools that play no fewer than 50 percent of their regular season schedule against other MHSAA member school teams was approved.

• In soccer, the Council did not adopt a National Federation rule adoption that eliminates a substitution for a player who receives a second yellow card. This action affects the 2012-13 school year only during which the Soccer Committee will consider this rule change further and its impact on Michigan’s ten-minute sit-out rule following a yellow card.

• A second day of weigh-ins will take place at the MHSAA Team Wrestling Finals, which will be independent of the previous day’s weighin, and all competitors would be given a one-pound growth allowance for consecutive days of weigh-in. The Council also approved a Wrestling Committee recommendation to permit wrestling practice to begin two Mondays before Thanksgiving. The first day of competition does not change.

The Council also reviewed reports on membership, with 763 senior high schools and 768 junior high/middle schools in 2011-12; eligibility advancement applications, which totaled nine for the year; the use of Educational Transfer Forms, which was stable this year; school violations, which declined significantly; attendance at athletic director and coaches in-service workshops; officials’ registrations, topping the 12,000 mark again; rules meeting attendance; and officials reports submitted for the past three sports seasons. The Association’s $9.8 million budget for the 2012-13 school year was also approved.