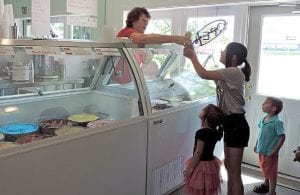 Beth Rogler scooped up ice cream for neighboring children who stopped in for a cool treat on a hot day at her new ice cream shop on Lennon Road.

FLINT TWP. — Sort of like an oasis in the midst of a concrete jungle, Over the Moon Ice-cream Saloon at 5158 Lennon Road is a homey retreat complete with a patio and gardens to enjoy along with a sweet treat.

Owner Beth Rogler opened the shop on June 20 and is hosting a Grand Opening Celebration July 11-13 including balloons for the kiddies, music on the patio and discount coupons.

Born and raised in the Flint area, Rogler is realizing a longtime dream to open her own shop serving about 30 flavors of Mooney/s/Stroh’s ice-cream flavors – a favorite since childhood. More flavors will be added after another freezer is brought in, Rogler said. So far Superman and Peanut butter Moose tracks flavors are most popular with customers.

A realtor, Rogler purchased the former longtime beauty salon, in 2012 and between working on other real estate projects, took her time converting the space into an ice-cream shop.

The patio with seating and a relaxing view of manicured gardens is a feature other ice-cream shops don’t offer, she said.

She currently has three employees including her daughter but will soon add three more. Two more will be hired later if customer traffic demands it, she said.

Rogler is busy trying to get the word out to customers, especially those working nearby, that her sweet shop is now open for business

Located between Linden and Dye Roads, west of Kohl’s department store and the post office, the shop is in a area mixed with churches, residential and commercial.

Roger’s plans on opening the shop seasonally between May 1 and the end of September, she said.

Over the Moon Ice cream Saloon opened June 20 on Lennon Road between Linden and Dye Roads.