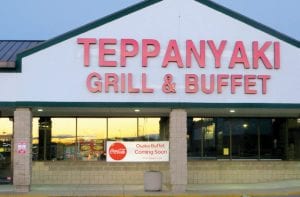 A sign is up announcing the soon-to-open Japanese-style restaurant in the Genesee Crossing Shopping Plaza on Miller Road, former site of Teppanyaki Grill and Old Country Buffet.

FLINT TWP. — Osaka Buffet Inc. is getting ready to try its hand at operating an all-you-can-eat restaurant at G-3583 Miller Road, in the Genesee Crossing Shopping Center, near Target. A banner in front of the building indicates plans to open soon. It will be the third restaurant there in less than three years.

Most people know it as the longtime site of an Old Country Buffet restaurant, which closed abruptly in Feb. 2012 after at least two decades of operation. The site was soon snapped up by a new owner who did a complete interior renovation before opening Teppanyaki Grill and Buffet, a Japanese-style restaurant, in late summer of 2012. That too closed last December.

Osaka Buffet surfaced as the new owner in early May of this year when the Flint Township Board approved an application for a Class C Liquor License to Yidi Weng. He listed a return address in Moline, Illinois but also stated on the application that he is a Michigan resident and owner of four restaurants. He told township officials that he would be opening the restaurant this fall. Interior work appears to be underway inside.

Osaka Buffet registered incorporation papers with the state of Michigan as a domestic for-profit business in March of this year.