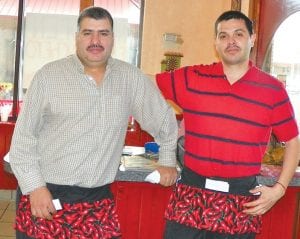 Nicolas Zaragoza, right, with his brother Jose at his new El Ranchero Authentic Mexican Restaurant in the Lincor Plaza.

But rising from those ashes is Zaragoza’s new venture – El Ranchero Authentic Mexican Restaurant which opened last month at 2091 South Linden Road in the Lincor Plaza.

Zaragoza searched around for a new location that had previously held a restaurant and therefore would not require a large upfront investment to get it going, said Jose Zaragoza, who works at El Ranchero for his brother.

El Agave, which Zaragoza operated for about a year, drew rave reviews online for patrons including some who called it the best Mexican restaurant in Genesee County. With Zaragoza in charge, El Ranchero is expected to uphold that reputation.

Besides the usual tacos, fajitas and enchiladas, El Ranchero offer dishes no one else has such as fish tacos and grilled tilapia, said Jose Zaragoza.

Customers also are showing a taste for el molcajete, an ancient Hispanic style of cooking that involves a lava rock food preparation and serving bowl.

“A lot of people like it,’’ Jose Zaragoza said. “Everybody wants to see what it is.”

He also said they plan to offer drink specialties like a nice Mexican tequila when they acquire a liquor license in a couple of months.

But for now the authentic cooking is the draw.

The spacious 4,020 squarefoot restaurant can seat up to 120 and accommodate very large groups, Jose Zaragoza said.

“ We have to do some advertising, spread the word,’’ he added.

An El Ranchero loyalty punch card offers a deal for customers to buy five lunches and get the sixth free. Restrictions apply.

The Zaragoza brothers both have owned restaurants previously and been in the restaurant business for several years, Jose said.