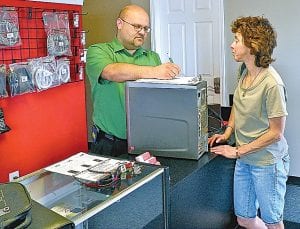 SWARTZ CREEK — Past customers of the Computer Doctors store, 8048 Miller Road, will find it has a new name but a familiar face behind the counter.

Michael Diericks managed the computer repair store about two and half years before becoming the owner last month. His first order of business was to change the name because Davison-based Computer Doctors still is in business.

It was a tumultuous month for Diericks who gained a business on April 1 and lost his fiancee and business partner who died April 10. She would have handled bookkeeping and office matters, freeing him up to focus on fast turnaround for computer repair. Diericks has hired his niece part-time to take over that job.

As a one-man shop, he spends his time on services including virus removal, memory upgrades and free diagnosis of problems. He also can build a desktop computer from scratch.

Already, Diericks has diversified the business quite a bit. He has added office products and computer accessories such as paper, recordable CDs, ink and toner. He’s also added copy and fax services. He also sells refurbished and new computers . 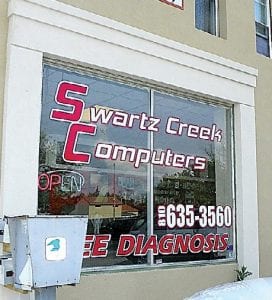 Diericks has worked in the computer repair business for about 10 years. He worked at the Computer Doctor Davison store before moving to Swartz Creek to manage the branch when it opened. He also has a background in sales.

Now a Swartz Creek resident, he has agreed to serve on an advisory board at ITT Technical Institute to network with others in the industry and to help the school customize its curriculum to stay current with industry trends, he said.

Diericks also accepts old computers for recycling or disposal. He pulls out the hard drive for free to assure donors that the memory is wiped clean.