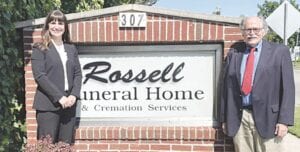 Caterer, a funeral director and manager of Rossell Funeral Home, bought the business from longtime owner Ralph Rossell on June 4. As a manager since 2013, Caterer had been gradually taking over operations for Rossell, who retired from day-to-day duties at the funeral home eight years ago.

“This is a wonderful opportunity that the Rossell family has given me to purchase the funeral home and make it my own,” she said. “I’m just honored to be able to serve this community and provide our clients with the dignity and respect that they have come to know and trust with Rossell Funeral Home.”

Rossell Funeral Home, located on 307 E. Main Street, has served Flushing families since 1947. The funeral home was established by Norman Rossell, who later formed a partnership with his brother, Ronald until his retirement in 1954. When Ronald Rossell retired in 1978, he passed the business on to his sons, Ralph and Ray.

Ralph Rossell then purchased the funeral home in 1988 and handled operations along with his wife Elizabeth for nearly three decades before selling the family business to Caterer.

Caterer, born and raised in Flushing, graduated from Flushing High School in 2001. She then attended Mott Community College before transferring to Wayne State University, where she earned a Bachelor of Science in Mortuary Science and graduated in 2005.

Although she had originally planned to pursue a teaching career, Caterer became interested in the funeral home industry shortly after both of her grandfathers passed away in the same year. She said she was impressed by how funeral home staff members assisted and comforted her family during both funerals.

“I really appreciated what they did for us during a difficult time,” she said. “It got me thinking, ‘maybe this is something I would like to do.’”

After receiving her degree, Caterer was licensed in 2005 and started her career with Lynch & Sons Funeral Directors in Clawson, MI, before returning home to work at Rossell Funeral Home in 2008.

“Ralph (Rossell) called me up out of the blue one day and said he had a job for me here in Flushing,” she said. “We set up a time to talk…and the rest is history. It was a great opportunity to come home and serve the community that I grew up in.”

As the new owner of Rossell Funeral Home, Caterer said that she will do her best to serve area families and carry on the business’s legacy.

“The greatest part of my job is being able to walk alongside families during their most difficult days,” she said. “To help support, gently guide them and serve them in a way that suits each family’s individual needs. To be trusted to help honor and celebrate someone’s life and help families to say goodbye is truly a privilege I will never take for granted.”