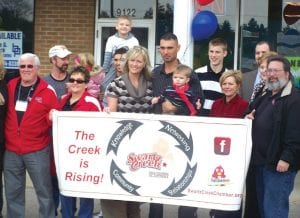 SWARTZ CREEK — The Swartz Creek Area Chamber of Commerce and the new owners of Elektric Beach Tanning held a ribbon cutting ceremony at the Swartz Creek tanning business on Nov. 9.

Krueger, who previously lived in Saginaw and worked in management for Famous Footwear, said she was a customer at Elektric Beach Tanning when she saw a for sale sign in the window of the business. She said she held discussions with the previous owners for about three weeks before the Bakers made her an offer that she could not turn down.

Krueger said buying Elektric Beach Tanning was a way for her and Nino to get involved in the Swartz Creek community.

“We just love the small town feel of Swartz Creek,” she said. “It was the best way to get involved with the community and get to know the people in the community.”

The Bakers had owned Elektric Beach Tanning for the previous four years, but the establishment has been a tanning business under other names for the last eight years.

“The Baker family ran a great business. They really helped me out and showed me the ropes,” Krueger said. “They are just remarkable people, and I hope to do them proud.”

Elektric Beach Tanning currently has seven tanning beds and three stand-up Hex’s. They offer memberships for one month all the way up to one year. Customers may also purchase a visit package or pay per individual visit.

“My goal is to have the lowest prices, so I will meet or beat anyone’s prices out there,” Krueger said.

“I’m meeting really great people and loving it,” she said.

Krueger said she plans to offer hair care, such as cutting, styling and coloring, and nail care, such as manicures, pedicures and acrylics, at the business in the near future, probably as early as January of 2013.

“I would like it to be a one-stop beauty shop,” she said.

Nino currently works for SCX Railroad and previously lived in Lansing, but grew up in Swartz Creek. Elektric Beach Tanning is located at 9122 Miller Rd. in Swartz Creek.