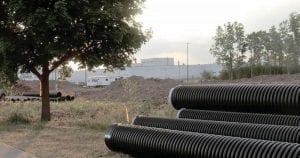 This construction site on Van Slyke near Bristol is the future home of a Talecris Plasma donation center expected to open in December.

FLINT TWP. — For a month or so, large machinery has been clearing and leveling a construction site on Van Slyke Road, near Bristol, next door to a McDonald’s and across the street from the General Motors complex. Curious minds want to know what’s going on.

When completed, it will be the home of Talecris Plasma Resources, a blood donor center.

Talecris is one of three companies under the umbrella of the Grifols Network, which operates 160 plasma donation centers nationwide, including two in Flint. BioMat USA and PlasmaCare Inc. are also part of the network, according to the corporate website at www.grifolsplasma.com/en/web/plasma/home

Site plans for the Flint Township project passed in December 2015, said Tracey Tucker, township building director. The building and grounds at 3045 Van Slyke Road will use about 2.8 acres of the 28.53- acre site, which will include a processing area, she said.

A state-of-the-art 15,500 square foot facility is being constructed. Expected opening date is December 2016, according to Vlasta Hakes, Director Public Affairs for Grifols. The center is expected to hire 20 people from the local area to start, with expectations to increase to 55 employees as the center expands its operations. The majority of the positions are full-time employment, ranging from entry-level jobs for individuals with a high-school diploma seeking career opportunities in the healthcare field to medically-trained professionals.

Grifols is investing approximately $3 million in the construction and setup of the donor center, whose design will incorporate new industry technologies including Donor Doc, a donor self-registration platform that helps improve donor screening efficiency, Hakes said. Over the next several years, the donor center plans to accommodate over 2,000 donors per week. This is important because it takes from 150 to 1200 donations to make enough medicine to treat just one patient for one year.

Grifols will ultimately contribute approximately $6 million each year to the local economy through payroll, donor fees and other operating expenses, Hakes said.

Founded in 1940 by a physician in Spain, Grifols entered the U.S. plasma collection market in 2002 with the purchase of SeraCare, now named Biomat USA, Inc. In 2003, Grifols acquired the assets of Alpha Therapeutic Corporation- Mitsubishi, which included a plasma therapy manufacturing plant in Los Angeles. And in March 2006, Grifols became the second largest collector of human plasma in the world after acquiring PlasmaCare, Inc., a Cincinnati, Ohio-based plasma collection company. Grifols acquired Talecris Biotherapeutics Holdings Corp. in June 2011, which enlarged Grifols’ plasma collection platform to approximately 150 donor centers in the U.S.

Grifols is a global healthcare company that produces life-saving plasma medicines for people with rare, chronic and life-threatening conditions. Plasma donated at Grifols plasma donor centers is used to produce important medicines out of human plasma for people with rare and serious conditions, such as immune deficiencies, bleeding disorders, a rare neurological disorder, a genetic form of emphysema, and to treat shock, trauma, and burns. Grifols operates the largest network of plasma donor centers in the world.