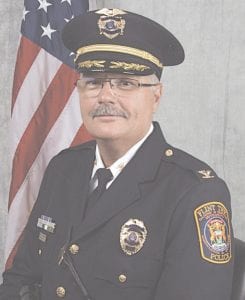 Police Chief George Sippert is retiring. His replacement is due to be name on May 21 at the township board meeting.

FLINT TWP. — A new police chief will be introduced at the May 21 township board meeting and sworn in on May 22.

The township board voted Monday to request from its Civil Service Commission the name of the candidate eligible for the promotion.

To facilitate a smooth transition, Sippert has spent the past few months planning for future leadership in the police department including promotions and hiring new officers to build the department to its budgeted staff of 45 officers.

He announced this week that nine qualified applicants took a recent written exam to become police officers. Of those, seven passed and were invited back for interviews. Of those, five passed and are now undergoing background checks and other prehiring requirements. Chief Sippert said he is hopeful that at least one of those candidates will be ready for hiring within the next couple of months.