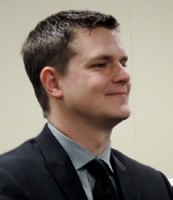 FLINT TWP. — Brad Wangler has been promoted to the rank of sergeant on the township police force.

He was recommended as the next eligible candidate from the Civil Service Commission list which was approved unanimously by the township board Monday night.

His swearing in ceremony was scheduled for 4 p.m. on Tuesday at the police station.

Police Chief George Sippert presented Wangler to the township board.

Wangler, 32, has served on the police force for four and half years and was with the Monroe Police Department for 4 1/2 years previously, Sippert said.

He lives in Swartz Creek, is a graduate of Swartz Creek High School and holds a bachelor’s degree in criminal justice from Michigan State University. He also is a 2004 graduate of the Oakland Police Academy.

Wangler first served the township as a field training office but has been assigned to the Flint Area Narcotics Group (FANG) for the past two and a half years.