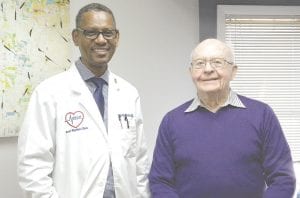 Dr. Mustafa M. Hassan (left) of the Heart Rhythm Clinic of Michigan earned the trust of Hal Flynn (right), who is 88, and recently had the WATCHMAN left atrial appendage implant. The implant is intended to help prevent strokes, and most patients can expect to be able to stop using blood thinners.

BURTON — Hal Flynn, who is 88, recently had a procedure that could greatly reduce his chance of having a stroke, allowing him and his family more peace of mind. Flynn was at risk of falling and getting blood clots.

“A blood clot could’ve caused a big change in my life,” Flynn said. “Dr. Hassan advised me of this procedure, which he thought might be worth of my consideration.”

Flynn’s risk of falling is due to his neuropathy.

“That means my legs don’t work as they used to,” he said.

Flynn last fell just before Christmas, but was often falling a couple times a week. Fortunately, Flynn was able to get to his walker last time, and his wife was there to support him. He said if he would have had a blood clot, causing a stroke, he could have died or become severely disabled, impairing his ability to enjoy that or other holidays in the future with his family.

“Some of my friends have had strokes and been severely disabled,” Flynn said.

He said he has been seeing Dr. Mustafa M. Hassan, a cardiologist and cardiac electrophysiologist for the Heart Rhythm Clinic of Michigan, for various things for about four years.

“I can’t say enough good about Dr. Hassan,” Flynn said. “He explained the procedure in layman’s terms, taking time for us to understand what this was all about.”

Flynn had the procedure done in the latter part of January. He was under full anesthetics, but says the procedure went very well. He stayed overnight one night in the hospital, and went home the next day. He said he has not had any problems since having the procedure, and feels relieved after having it.

Hassan noted a study in which it was found a group in which the device was implanted had less bleeding complications than a group that used blood thinners.

Although Hassan said the device, which is FDA-approved, was made available in the United States just last year, the implant has been approved in Europe since 2005 and has been in clinical trials for many years.

The device is suitable specifically those with atrial fibrillation (AF), which is the leading cause of strokes in the United States and around the world. Hassan said AF increases stroke risk by 500 percent.

Hassan said Flynn was taking blood thinners because he had AF.

“Risk of injury is going to be higher if you take a blood thinner and you fall,” Hassan said.

A doctor guides the WATCHMAN implant into the patient’s heart through a catheter inserted through a vein in the upper leg. It does not require open heart surgery.

Hassan said about two to three percent of patients experience complications with this procedure, and those who think they may be candidates for the WATCHMAN should discuss it with their doctors.