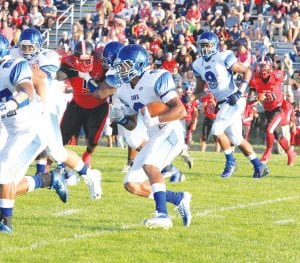 GENESEE COUNTY — The first practices of the 2015-16 school year next week provide a valuable opportunity for reminders on the importance of athletes remaining refreshed during the hottest days of training – and also an opportunity to explain new Michigan High School Athletic Association rules in football aimed at further promoting safety during competition.

The first practices begin next week for approximately 110,000 student-athletes taking part in eight sports in which the MHSAA sponsors postseason tournaments. Football practice for more than 40,000 players can begin at MHSAA schools Monday, Aug. 10, followed by first practices for all other fall sports Aug. 12.

Each year, the MHSAA provides information to its member schools to help them prepare for hot weather practice and game conditions in the late summer and early fall. Those resources – including the MHSAA’s Model Policy for Managing Heat & Humidity– are available on the revamped MHSAA.com Health & Safety web page at www.mhsaa.com/schools/healthsafetyresources.

This also will be the second season for football practice changes made last fall to promote heat acclimatization and limit helmet-to-helmet contact. And earlier this week, 70 MHSAA high schools from across Michigan received training to take part in one of two sideline concussion testing pilot programs expected to benefit 20,000 student-athletes over multiple sports.

“There’s been a lot of attention focused on football regarding head safety, but the fact is all school sports need attention to the safety of student-athletes,” MHSAA Executive Director John E. “Jack” Roberts said. “We’re addressing all sports at all levels, practice and competition, to make sure our staff, who are interacting with the young people, know the best practices for safety in school sports. And we’re trying to communicate to the public that school sports really are safer than ever.”

The final weeks of July were another reminder of the importance of adjusting to hot weather as practices begin. The MHSAA Representative Council adopted in 2013 the Model Policy for Managing Heat & Humidity that, while not mandated for member schools, has been adopted by many at the local level. The plan directs schools to begin monitoring the heat index at the activity site once the air temperature reaches 80 degrees and provides recommendations when the heat index reaches certain points, including ceasing activities when it rises above 104 degrees.

The model policy is outlined in a number of places, including the publication Heat Ways, which is available for download from the MHSAA Website. Roberts reminded that the first days of formal practices in hot weather should be more for heat acclimatization than the conditioning of athletes, and that practices in such conditions need planning to become longer and more strenuous over a gradual progression of time. He added schools also must consider moving practices to different times of day, different locations, or change practice plans to include different activities depending on the conditions.

To assist in acclimatization, the football practice rule changes of 2014 allow for only helmets to be worn during the first two days, only shoulder pads to be added on the third and fourth days, and full pads to not be worn until the fifth day of team practice. The policy in detail can be found on the Football page of the MHSAA Website at http:// www.mhsaa.com/portals/0/documents/FB/ practicepolicy.pdf.

Practice in football must begin on Aug. 10 for all schools wishing to begin regular-season games the weekend of Aug. 27-29. Schools must have 12 days of preseason practice at all levels before their first game, and those 12 days of practice may not occur before 16 calendar days.

Continuing the focus on player safety, additional rules changes were made in football for 2015 that again focus on minimizing injury risk:

The definition of unnecessary roughness was expanded to include excessive contact with an opponent, including a defenseless player, which incites roughness. A defenseless player can be considered one no longer involved in a play, a runner whose progress has been stopped, a player focused on receiving a kick or a receiver who has given up on an errant pass, or a player already on the ground. Unnecessary and excessive contact can include blindside blocks and players leaving their feet to contact an airborne receiver attempting to secure the ball.

The grabbing of a quarterback’s facemask by a defensive player, if it does not including the twisting, pulling or turning of the facemask, will be ruled incidental and result in a five-yard penalty instead of a roughing-the-passer penalty and automatic first down.

A few notable changes will go into effect for other fall sports:

In cross country, the loosening on what runners are allowed to wear during competition continued after a ban on jewelry was lifted in 2014. Runners also now may wear sunglasses, and previous restrictions have been eliminated for specific styles of head gear – ski bands, head bands, stocking caps and hoods attached to other clothing. Previously, those head gear had to meet criteria including color and size of brand logos displayed.

In swimming and diving, the ban on wearing jewelry has been lifted. The National Federation of State High School Associations deemed the ban unnecessary because there is little risk of injury to the competitor or opponents.