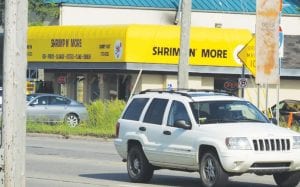 Shrimp N’ More, a new seafood restaurant, is now open on Corunna Road, just west of the I-75 freeway. Look for the bright yellow awnings on the south side of the road.

“A lot of research and planning went into our menu items,’ said Angela Mitchell, administrative and public relations spokesperson. “We ran a test kitchen for months to perfect the recipes.”

The restaurant is located in the building with the yellow awnings formerly occupied for many years by the Happy Valley Oriental restaurant, opposite of the Rave Cinemas parking lot.

The new owners bought the building in December 2013, waited 90 days for the previous owners to vacate, then spent two months renovating before opening May 30, Mitchell said.

Owners are Ronnell Blackmon and Omar Hasan, both of Flint.

“This is an original idea between the partners,’’ Mitchell said.”Omar loves seafood and Ronnell loves to cook.”

Hasan is finishing up his Navy career and previously owned a restaurant in Texas. Blackmon has more than 20 years experience in culinary arts at various restaurants, Mitchell said. He also loves creating new recipes and restaurant management.

The restaurant has been remodeled and divided into separate dining and take-out areas.

A new color scheme, furniture, lighting and flooring add to the cozy ambience.

“It was a total overhaul’’ Mitchell said. “Customers come in and comment on how different it is.”

The dining area is also available for use as a banquet facility, she said.

“We have a true passion for our community and wanting to see growth,” Mitchell said of the decision to open a restaurant here.