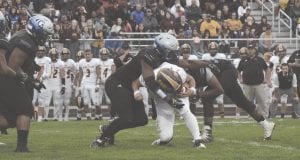 EAST LANSING – The Michigan High School Athletic Association (MHSAA) made changes to the high school sports transfer rule last year and those changes, now sport specific, take effect in the fall. A summary of the rules are below, with a link to the full rules, which are too lengthy for publication.

Unless a high school student meets one of the 15 stated exceptions – most exceptions involve a defined residential change – a student will not be eligible for the next season in a sport he or she participated in at his or her former high school (any level) during the most recent previous school year. A student would be eligible in sports he or she did not participate in during the previous or current school year. Ineligibility is for the next school year in the sport played previously. A student who transfers during a season will not be eligible that season in a sport played that season, and ineligible in that sport the next season.

This Sport-Specific Transfer Rule was first implemented with sports played during the 2018-19 school year. The effective date of ineligibility under the new rule is the start of the 2019-20 school year. In other words, a student who did not meet an exception who transfers any time after Oct. 1, 2018 is ineligible in 2019-20 in sports played in 2018-19. During 2019-20, a student may play any sport he or she did not play in the previous school year.

The transfer rule activates once a student is enrolled in the 9th grade. Enrolled, for the purposes of this rule, means on the official records of the school and actual attendance in one or more classes (traditional or online). A student is also considered enrolled if he or she participates in a scrimmage or contest, such as in August before school starts.

Once a student who is enrolled in grades 9 -12 changes schools, that student is not eligible for specific sports played previously in high school UNLESS he or she meets one of the 15 exceptions, which generally have to do with a residential change or a school’s status changing. Below are brief summaries of the 15 exceptions (these are not the full rule). There are many situations which are NOT exceptions and the transfer student is not eligible in a sport played previously – see the top of page two.

1. Student moves with the people he/ she was living with previously (full & complete).

2. Not living exclusively with either parent and moves back to them. +

3. Ward of the Court placed with foster parents.

7. School is reorganized or consolidated.

(ETF) = Educational Transfer Form is only used for these 3 exceptions (8, 12 & 13). The current MHSAA form must be completed by both school principals certifying that the transfer is not significantly related to or motivated by athletics and returned signed by the MHSAA before the student participates in a game or scrimmage. There is an allowance for students whose parents never married to use this form. (See Interpretation 92).