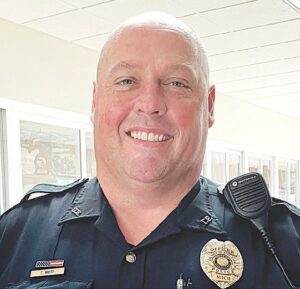 GRAND BLANC TWP. — This year, one of the fresh faces to greet students in the Grand Blanc Community Schools will be Officer Tom Whitt of the Grand Blanc Township Police Department, who has taken over the role of school resource officer (SRO) at Grand Blanc East Middle School.

Whitt attended ‘Teaching, Educating and Mentoring’ (TEAM) training when the SRO job was originally made available years ago. When Officer Jon Swartz was selected for the position at that time, Whitt says it was the correct choice. He speaks highly of the outgoing Swartz, and is excited to step into this role, but says Swartz’s shoes will be difficult to fill.

“He did an amazing job and GBCS is safer due to his commitment to this position and his love for the schools and community,” he said.

Police Chief Ron Wiles announced the promotion of Swartz to sergeant and the change in his roles.

“We truly appreciate the strong community partnership we have with Grand Blanc Community Schools and we are very proud of the ongoing school resource officer program,” he said. “For years, Officer Swartz and Officer Wolschleger (WMS SRO) have played an important role in not only school, staff, and student safety, but also in developing relationships across the district.

“Officer Whitt is committed to helping others, especially kids, and understands the importance of good communication. His experience as a police officer, coach, bus driver, and father will certainly serve him well in his new role.”

Whitt is the father of five children: Briana (23), Morgan (21), Abbygail and Allyson (19), and Thomas Jr., 16. The four girls are Grand Blanc graduates, while Thomas is in his junior year at Grand Blanc High School.

Whitt has coached athletics and even driven a bus for Grand Blanc Schools in the past. He still plans to take a field trip route here and there to help out if he has time.

He calls his decision to accept this SRO position a “no brainer” because it combines his mission to help people with his dedication to the youth in our area.

Whitt has served the community as an officer in Grand Blanc Township since 2000, with prior years of service with Detroit Police Department and the City of Grosse Pointe Woods.

He said, “I believe that each and every encounter with someone is an opportunity to shape or change their lives for the better, and that is my goal, even if I am arresting someone during the course of my duties.”

Whitt enjoys spending time with his family and friends. He likes to gather people together and cook for them and enjoys going on travel adventures with his brothers and children. He has also taken up hunting and fishing. He enjoyed singing and performing with his former church, which unfortunately closed very recently. He is currently looking for a new one to call “home.” — L.R.