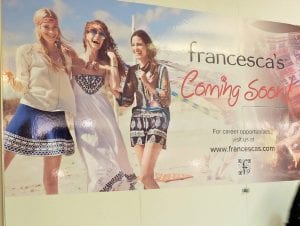 Francesca’s, a women’s boutique, will occupy a space in the Macy’s wing. Right, Planet Fitness is under construction in the mall’s Burlington wing.

Planet Fitness is moving into the Burlington Coat Factory wing and Francesca’s, a women’s specialty retailer, is coming to the Macy’s wing, according to Kristen Cassabon, mall marketing manager.

Francesca’s is due to open in early 2015 but no official opening date has been set for Planet Fitness, Cassabon said.

Founded in 1992, Planet Fitness is a New- Hampshire-based fast-growing fitness franchise with nearby gyms currently in Burton and Fenton.

Francesca’s was founded in 1999 in Houston, Texas and has grown to more than 450 boutiques in 45 states, according to its web site. It offers a handpicked collection of products including clothing, shoes, purses jewelry and accessories, and giftware. 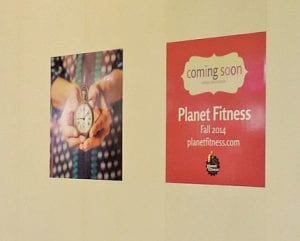