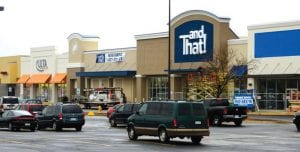 Five Below and And That! stores opening soon at Pirate’s Plaza on Miller Road. Jobs Fair starts today.

FLINT TWP. — Just in time to earn extra Christmas shopping money or to find affordable gifts — depending on which side of the counter you’re standing behind – two new stores are due to open soon at Pirate’s Plaza on Miller Road.

Five Below and And That! stores will join Ulta cosmetics as the newest tenants in the shopping plaza anchored by Sports Authority and PetSmart. All three occupy the former Circuit City electronics store which has been subdivided.

Five Below is shooting for a Nov. 1 grand opening and will bring about 35 new jobs, said Elizabeth Romaine, spokeswoman for the Penn.- based chain which currently operates about 190 stores open from North Carolina to New Hampshire.

A sign on the building announces a Job Fair being held Oct. 10-13 from 10 a.m.. to 6 p.m. The onsite interviews will be conducted in the former Border’s bookstore located in the same plaza. Romaine said applications also are being accepted on the store’s web site. 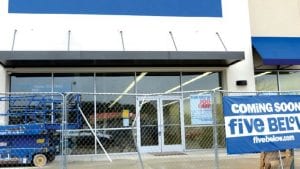 It was founded by David Schlessinger, creator of Encore Books and Zany Brainy with Tom Vellios, former CEO of Zany Brainy.

Also coming soon right next door is And That! a subsidiary of Bed, Bath and Beyond, akin to its Christmas Tree Shops bargain store that sells a variety of goods at affordable prices including home furnishings, housewares, clothing an gift items.

Company spokespeople did not respond to a request for more information but large “hiring now” signs for all to see are posted on the building and alongside Miller Road.