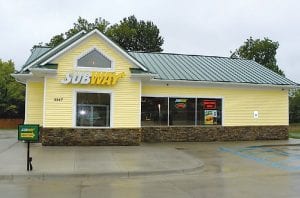 The newly built Subway on Beecher Road is the only fast-food eatery for miles in any direction.

Besides being close to McLaren Medical Center, it is the only fast-food restaurant for more than a mile in any direction.

“We noticed there was no other food in the area; and this lot was available,” said Parul Minaudo, manager, about the location choice.

Minaudo also is co-owner of the franchise with her parents Carson and Kay Patel and her brother Prajesh Patel, M.D.

It is the fourth Subway in the family-owned franchise but their entrepreneurial roots go way back. Minaudo said her parents for many years owned the former Dunkin Donut shop at Atherton Road and Dort Highway in Flint where Walgreen’s is now located. They retired for about eight months before deciding they wanted to get back in business.

They bought Bj’s Donut Shop on Richfield Road and about a year later added the Subway shop as it exists today, she said. They have since obtained Subway’s on Genesee Road and at Miler and Ballenger Road in Flint Township.

Minaudo added that her mother and brother also are getting ready to branch out into owning a Tropical Smoothie Cafe in Davison, located in a former Subway shop.

Their Beecher Road shop opened in late May and was built from the ground up on the site of a former pharmacy.

“So far, so good,” Minaudo said about business traffic. “It’s going to take time for word to spread that we are here.”

They’re working on that by offering coupons and sending out flyers to nearby residences and businesses, she said.

Besides McLaren affiliates, many businesses operate along that Beecher Road commercial corridor between Ballenger Highway and Graham Road.

In fact, the line at Subway may get longer when McLaren’s new Proton Therapy cancer treatment center opens later this year. It is a huge, multimillion facility expected to draw overnight patients from nearby states and Canada.

Minaudo also works at McLaren as a hospice nurse and her brother is a physician there, which makes their Subway shop conveniently placed for them.

Minaudo said she is fully staffed for now but there’s always turnover because many employees are students.

“This is the newer model,” Minaudo said of the open, airy restaurant style which is decorated on the inside in earth tones and on the outside by sunny yellow siding with stone accents.