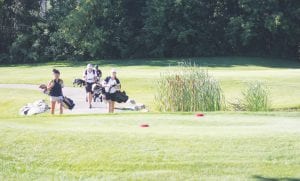 Last year’s Tuneup drew 20 teams to Lapeer Country Club, but that number is up to 23 this year.

LAPEER – The merger of Lapeer East and Lapeer West high schools has had a dramatic effect on one of the first athletic competitions of the 2014-15 school year.

The seven-year-old Lapeer Summer Tuneup Girls Golf Tournament will have a new name and a noticeably altered field when the girls tee it up this Friday at Lapeer Country Club.

First off, the name has been changed to the First Annual Lapeer Lightning Summer Tuneup, a move designed to help solidify the merger and launch the new era of a one-high school sports town.

More interestingly, the consolidation moved Lapeer High up to the Div. 1 ranks for postseason tournaments, and when Lapeer was chosen to host a Div. 1 regional for girls’ golf this fall, the Tuneup soared in popularity.

“All of a sudden we’re seeing these Div. 1 teams that are in our region that want to play in the Tuneup,” said Lapeer coach Steve Carlson. “They want to play Lapeer Country Club because that’s where the regional is at.”

The field is maxed out at 23 teams, up from 20 last year, and nine of those 23 will be back for the regional tournament Oct. 8.

The most impressive new entry is Lake Orion, which finished 10th in last year’s Div. 1 state tournament. The Dragons also have scheduled a pair of home-and-home matches with the Lightning, including a Sept. 25 dual at Lapeer Country Club.

Davison also played in the Div. 1 state finals last fall, but the Cardinals aresendingaBteamtoLapeerwhile the A team plays in the Traverse City Central Lober Classic. The varsity Cardinals will get a chance to play Lapeer Country Club in a Saginaw Valley League meet Sept. 22.

South Lyon is the defending Tuneup champion and went on to finish fourth in the Div. 2 state finals last year. The Lions are bringing two teams to Lapeer this week.

The rest of the field has Grosse Pointe North, Imlay City, Petoskey, South Lyon East, Troy Athens, a Lapeer B team and Utica, the 2011 and 2012 champion.

“It will be a good mix,” said Carlson. “We haven’t turned anyone away, but we said we’re about where we want to be. You want to get as many teams as you can because more teams will help us make more money, but it slows it down a little bit, too. Twenty-three is a good number.”