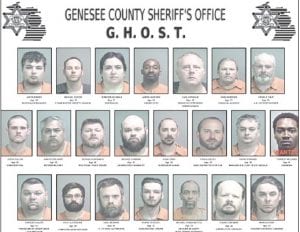 The suspects, ranging in walks of life from an unemployed man to an executive with Comerica Bank, were all arrested during a sting operation by GHOST between April 11-May 15 at area motels where undercover police had arranged meetings between the men and who they believed was a 14-year-old boy or girl.

“We were set up in different hotels around the county,” said Genesee County Sheriff Robert Pickell, during a press conference held Monday. “We were not looking to bust johns, sex between adults. These men were specifically there for either a 14-year-old boy or a 14-year-old girl.”

Pickell said officers assigned to the task force impersonated the underage boy and girl online and used a female officer who looked and sounded younger to handle verbal and video engagements with the suspects.

“We were in active conversation with many of them right up until they walked through the door,” he said. “We entice them to come in, we put it out there that we’re looking for a party. We’re in the dark web, the belly of the beast. The officers get the conversations going until the time they walk into that room.”

Pickell said 21 suspects have been arraigned, while another is still at-large.

He displayed money, crack, heroin and weapons seized from the 21 suspects. One suspect, Harvey Delgado, 59, was arrested and was found in possession of a serrated knife he claimed he brought to his alleged meeting with a juvenile for protection, said Pickell.

“You hear about prostitutes and young kids being hurt,” said Pickell. “This is the scary part of this business.”

Beckman, of Vassar Township, the only woman arrested, is charged with allegedly trafficking her 6-year-old child for sex with Foster. He is also suspected of having sex with his own 2-year-old son, said Pickell.

“What does a pedophile look like?” asked Pickell. “It can be a prominent guy, a financial advisor, manager of a restaurant, a guy who ran for U.S. senate. They come in all sizes, shapes, colors and creed. That’s why I’m warning parents – we used to have to be concerned when they’re (children) outside, now you have to worry about them up in their bedroom, on the computer.”

Pickell said the sting that netted these 21 suspects is just the beginning of what the GHOST team is going to do.

“That’s why we formed the sheriff’s GHOST, we know it’s out there,” he said, of the child sex trafficking community. “Genesee County is a free work zone – they think nobody’s watching. Well, now we’re watching and we’re actively involved going out and seeking predators. It’s ugly ugly work.”