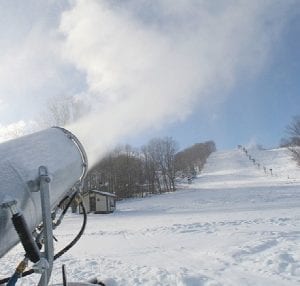 Snow machines, like this one in Boyne, allow skiers to enjoy the slopes longer every season.

Ski areas usually never get a second chance to make a first impression. That’s why Midwest areas embrace new technology, including advances in lifts and equipment, that improves the experience for their skiers and snowboarders.

“We’re really trying to make a person’s first experience positive,” says Joe Vittengl of Devil’s Head in Wisconsin. “If people have a bad experience their first time skiing or snowboarding, they throw in the towel. They won’t come back again.”

Surface conveyor lifts, which resemble moving sidewalks, have made “a huge difference” for beginners at Devil’s Head and other Midwest areas, says Vittengl. Over the last several years, Devil’s Head has replaced all three of its venerable rope tows with the new surface conveyor lifts, where skiers and snowboarders simply stand on the moving sidewalk and are transported up the hill.

“If you’re a beginner, especially a snowboarder, it’s harder to ride up the hill on a rope tow than it is to come down,” says Vittengl. “But the surface conveyor lifts are so easy, and they have really improved the learning experience.”

“It’s been tremendous, especially with the smaller kids,” says LoBianco. “There’s more learning going on instead of worrying about getting up the hill.”

In Michigan, sister resorts Boyne Highlands and Boyne Mountain have replaced all of the rope tows and handle tows in their beginner areas with surface conveyor lifts.

“They’re so easy to use,” says Boyne’s Erin Ernst. “They make it easier for all ages, whether for children or for adults who are getting back into the sport or trying it for the first time.”

Technology advances in equipment and apparel have also made skiing and snowboarding more enjoyable.

“The new shaped skis have been fantastic,” says LoBianco. “You ski on a shorter length than the older, traditional skis, but they’re more stable and also easier to turn. Skiers are jumping from a beginner lesson to intermediate lessons more quickly than they ever have.”

Rollie Westman, who has been teaching skiing for more than 50 years at Wisconsin’s Trollhaugen ski area, remembers the days of “wool sweaters and stretch pants” and says, “People stay warmer and drier now because the clothing is waterproof and breathable. It’s a much more enjoyable experience for them now.”

Advances in snow-making keep skiers on the slopes longer as well. Combining air and water to make snow is sometimes a science, sometimes an art, and always special for Midwest skiers and snowboarders, who wouldn’t be able to enjoy their sport without it. Each fall, as soon as the temperature drops below 28 degrees, hundreds of snowmakers like Dan Raedeke, president of Minnesota’s Wild Mountain, begin covering the slopes of more than 100 Midwest ski areas with machine-made snow. This traditionally allows Midwest areas to open by Thanksgiving or early December, have a reliable base throughout the season and stay open later into the spring.

Midwest skiers and snowboarders also rely on everyday technology to improve their on-snow experiences, including the internet.

“We have live webcams at our ski area,” says Ernst, from Boyne Highlands in Michigan. “People in Detroit are sitting in their offices and looking at the webcams. There may not be snow in Detroit, but they can see for themselves that we have snow up here. It’s instantaneous and it gets them psyched to come skiing.”