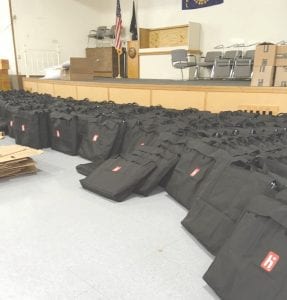 Ballot boxes tested, bagged and ready for delivery to township from UAW 659.

FLINT TWP. – Voters who live in the Flushing School District will be first to use the township’s new voting machines when they go to the polls on November 7 to decide a School Improvement Bond Proposition. The polling place at Our Lady of Lebanon Church on Calkins Road, 4133 Calkins Rd. No other issues are on the November ballot that affect other township precincts, said Township Clerk Kathy Funk.

A team of approximately 38 clerks, deputy clerks and staff members from throughout Genesee County, including Funk and Flint Township Election Specialist Angie Thygesen, took part in the testing. The Hart Intercivic equipment was chosen by Genesee County to serve voters beginning with elections in November. Funding for the new machines was made possible, in large part, from a federal Help America Vote Act (HAVA) grant set aside by the state of Michigan. 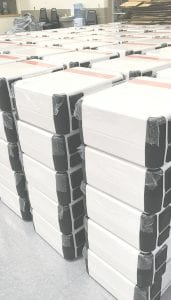 Hart ballot scanners, 266 in total, unpacked and ready for testing.

Acceptance Testing involved every piece of machinery and accompanying accessories – including ballot boxes and handicap acces- sible tables – being unpacked and tested to ensure that all pieces were in working order according to standards set forth by the state of Michigan’s Bureau of Elections, Funk said.

The state of Michigan provided funding for 17 of the ballot scanners and the four VAT Touch Writers. Clerk Funk, with board approval, purchased two additional ballot scanners – one to be used for a third Absentee Voter Counting Board and one as a back-up in case of machine failure on Election Day.

“I’m excited to have an opportunity to put the new equipment to use,” Funk said. “The Hart voting machinery is state-of-the-art technology for the tabulation of votes. It will be a great asset to our voters and election inspectors, as well.”