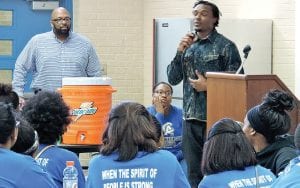 He delivered an inspirational message to an audience of mostly high school students, encouraging them to never give up on their dreams.

Carr also pointed out four adults in the audience — his parents and two aunts — who he credited with instilling in him a foundation of good principles and morals that pushed him to success.

“Those four people have been the ones from day one who put that little tiny seed in my head …. (that) manifested into something bigger than I ever would have dreamed,”’ he said.

Actually Carr said he started out with multiple dreams. His overall dream was “to be somebody.” Other dreams included playing basketball, football and becoming a pediatrician, he said.

Having a vision and a strong foundation comes into play when the naysayers show up in life trying to crush your dreams,

He wished he had brought photographs with him to show his small size in high school, when naysayers told him he was too small and not fast enough to play Division One football.

When you are 5-foot-8 in the 11th grade, as Carr was, the doubters and naysayers will tell you that you will never play football in the NFL, Carr said.

He refused to heed the naysayers and relied on discipline, focus and a firm foundation of support to keep him going.

“I worked too hard to get to this level for you to turn me around before I get my foot in the door,” he said of that phase of his life.

That first foot in the door was an opportunity to play football at Grand Valley State University, a Division Two level program.

Cue the naysayers saying a Division Two football career would not pan out into bigger things.

By his senior year, Carr was racking up honors and gaining notoriety. He was a fifth round draft pick by the Kansas City Chiefs in 2008 where he played for four years before signing a five-year, $50 million contract with the Cowboys in 2012.

“Dreams don’t die, they only become a fantasy if you don’t put that action into play to make that dream a reality,’ Carr said.

“History has been made across this country by pioneers that have faced the same things we face today, the same type of adversity, same type of naysayers,” he said.

He encouraged the students to expose themselves to as many positive experiences as possible, paying attention to influences from their environment, the type of people they have around them, even what they watch on television.

Ten years ago Carr was sitting where the students are today, he said

“One day somebody in this room is going to be up here giving the same exact message,’’ he said.

He advised the students to have multiple dreams in case one does not work out.

Carr shared that he is pursuing another of his dreams — to change the world. He has established the Carr Cares Foundation to encourage educational advancement and physical fitness for young people.

Playing football is a platform to make contact with other movers and shakers in pursuit of that higher vision, he said.