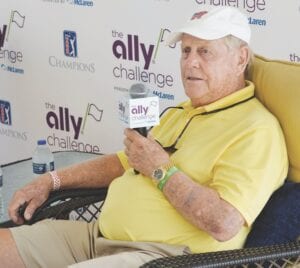 Jack Nicklaus speaking with the media. Photo by Ben Gagnon

Nicklaus, an 18-time major champion and World Golf Hall of Famer, participated in a pre-tournament press conference last Wednesday to kick off Ally Challenge festivities. He said that he was excited to be part of the PGA Champions Tour’s official return to action after a four-month delay due to COVID-19.

“My motivation in coming is I love the game of golf,” he said. “I love to promote it and grow it wherever we go.”

Nicklaus, who played frequently in the PGA Tour’s Buick Open at Warwick Hills, said that the course has changed a great deal since his playing days—with far more trees and bunkers for players to contend with.

“The golf course has matured tremendously over the time,” he said. “It used to be where you could drive it anywhere because there wasn’t any trees. Now you’ve got to drive the ball pretty straight.”

“Well, (prior to that), I hadn’t chipped a ball in for about five years and I haven’t chipped one in since,” Nicklaus, 80, said. “I’m competitive, you know. I can’t hit the ball anymore. My clubhead speed’s so slow, it sounds like I’ve got the clubhead cover on it, and it goes like it, too. (But) I can still hit a decent bunker shot or a decent chip or putt.”

Although he didn’t play in this year’s Pro-Am events, Nicklaus said that he enjoyed coming out to Grand Blanc to support the tournament and the charitable efforts undertaken by Ally and McLaren.

Nicklaus, who won 73 PGA Tour events between 1961 and 1986, also played on the PGA Champions Tour (then called the PGA Senior Tour) between 1992 and 1996 and claimed several major titles. He officially retired from golf in 2005.