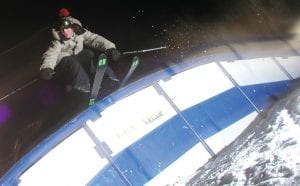 Night skiing and snowboarding is a big draw at area resorts.

STATEWIDE — When Walter Stopa installed lights for night skiing at Wilmot, WI, in 1955, it was such a curiosity that “The Tonight Show” came to the ski area and filmed people skiing under the lights. Now virtually all of the Midwest’s more than 100 ski areas have lighted slopes and, as Walter’s daughter, Diane Stopa Reese, says, “Night skiing is worth its weight in gold.”

At Ski Snowstar Winter Sports Park in Illinois, Todd Kempf agrees. “Night skiing is the bread and butter for us and other Midwestern areas,” says the director of skier services. “There’s a great, festive atmosphere at night. People are coming out here to blow off some steam and unwind after work or school.”

Wilmot is only 60 miles from Chicago and, on a clear evening, the lights of downtown Chicago are clearly visible from the top of the ski area. “We are open until 11 p.m. every night of the week,” says owner Diane Stopa Reese. “Even if people are working late in Chicago, they can still come out and ski or snowboard for a couple of hours.”

Her father, an architect, founded Wilmot in 1938 after doing topographical studies across northern Illinois and southern Wisconsin. He opened with a rope tow powered by a Ford motor. Wilmot was one of the first Midwest areas to introduce snowmaking and Stopa figured that because he was making snow at night and had to install lights, he might as well let skiers come slide under the lights. “Snowmaking and night skiing have always gone hand-in-hand for Midwest ski areas,” says Stopa Reese.

Mt. Holly in Holly offers nighttime skiing and snowboarding, along with Alpine Valley in White Lake and Apple Mountain in the Tri-Cities area of Midland, Saginaw and Bay City.

At Wild Mountain, Minnesota, located an hour north of Minneapolis-St. Paul, night skiing is an important aspect of the area’s business. “Night skiing and snowboarding allows our visitors to come after work or after school,” says Amy Frischmon, vicepresident at Wild. “They can ski or snowboard for a few hours and then go home.”

Wild Mountain also offers lesson programs and racing leagues five nights a week. “Our racing league is like a bowling league for our skiers,” says Frischmon. “The same people come back week after week and they have a blast.” Wild Mountain is open until 10 p.m. Monday through Friday, until 9 p.m. on Sunday and until 1 a.m. on Saturday nights.

At Snow Creek, Missouri, the area stays open until 3 a.m. every Friday and Saturday night for “Midnight Madness.” According to Snow Creek president Dave Grenier, “Our midnight sessions are some of our most popular sessions. We have a lot of church groups and youth groups, and we allow Boy Scout troops to camp overnight for free.”

Grenier says that a full 35 percent of Snow Creek’s business is done during night skiing sessions. “Night skiing and snowboarding also really extends our season and gives people more time to be on the hill,” he says. “I look at it as taking our season from an average of 84 days to 108 days.”

Skiing or snowboarding at night can feel like a different experience–even at the same areas. “After 4 p.m., it just looks like a whole different world after the lights come on,” says Kempf of Ski Snowstar. “It feels different, it looks different.”