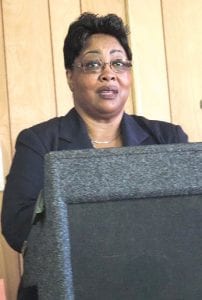 Shirley Cochran, founder and executive director of Motherly Intercession, thanked the AAF-GF for its generous award to promote awareness of her program.

FLINT TWP.— For many years, Shirley Cochran, founder and executive director of Motherly Intercession, has thought of her organization as one of Genesee County’s best-kept secrets.

For 17 years, Motherly Intercession has quietly gone about the business of helping children of incarcerated parents.

“Although Motherly Intercession commenced in 1999, the organization has remained to be the best kept secret in Genesee County, mainly because our budget never enabled us to purchase the advertisement that we needed,” Cochran said.

But that all changed last week thanks to a media blitz provided by the American Advertising Federation of Greater Flint (AAF-GF).

Motherly Intercession was the recipient of the AAF-GF’s “Create & Collaborate” award, a free bi-annual marketing campaign created by a committee of local media professionals.

The results of their multi-media marketing campaign for Motherly Intercession called Unlock Their Future was unveiled last week at a press conference. 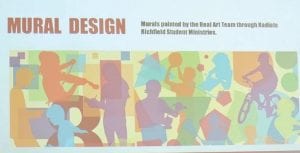 A colorful mural inside the building is being created through Radiate Richfield Student Ministries.

Working with Cochran, the Create and Collaborate Committee created a “media blitz” of radio, TV, newspaper and billboard ads that will be featured for the next year or so. Radio and TV stations will provide Public Service Announcements as space is available. Newspapers ads and billboards also are being provided pro bono.

Billboard and digital ads also will direct those who want to know more to a website at www.unlocktheirfuture.org.

In addition, thanks to a contribution from an AAF-GF member a highly visible sign has been placed in front of the Mother Intercession building, 3010 S. Dye Road at the corner of Lennon Road.

Already the sign has generated interest, Cochran said. People are calling or knocking on the door to ask what service is provided. Motherly Intercession’s goal is to level the playing field for children of incarcerated parents by providing them with the tools needed for success including academic support, guidance and love.

The marketing campaign is designed to raise awareness about the organization. No value can be placed on the AAF-GF Create and Collaborate Award but its dollar value is estimated at more than $200,000, said Lue Grady, an AAF member and mistress of ceremony at the campaign press conference.

“This is our way of giving back to the community,” she said.

The AAF of Greater Flint is one of a handful of AAF clubs nationwide who provide a collaborative project of this magnitude, said Dave Perry, a past AAF-Gf president and Lt. Gov. of District 6 (Michigan, Indiana and Illinois).