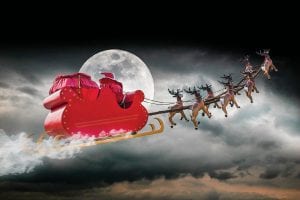 Starting at 2:01 a.m. EST on Dec. 24, website visitors can watch Santa make preparations for his flight. NORAD “Santa Cams” will stream videos on the website as Santa makes his way over various locations. Then, at 6 a.m. EST, trackers worldwide can speak with a live phone operator to inquire as to Santa’ whereabouts by dialing the toll-free number 1-877-Hi-NORAD (1-877- 446-6723) or by sending an email to noradtrackssanta@outlook.com. Any time on Dec. 24, Windows Phone users can ask Cortana for Santa’s location, and OnStar subscribers can press the OnStar button in their vehicles to locate Santa.

NORAD’s Santa tracking began in 1955 when a media advertisement directed children to call Santa direct, only the number was misprinted. Instead of reaching Santa, the phone rang through to the crew commander on duty at the Continental Air Defense Command Operations Center. — L.R.