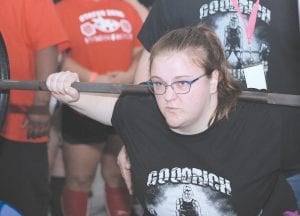 NORTH BRANCH — The Michigan High School Power Lifting Association state meet turned out to be a recordbreaking one at North Branch High on Sunday. Goodrich’s Willow Tetmeyer set four new state records in the girls’ competition and teams from across the state put their backs into a strong competition. Tetmeyer set the four state records in the 242 lb. class with a 355 lb. squat, 170 lb. bench, and 450 lb. deadlift for 975 lbs.combined weight.

Usually held at a college, a shortage of venues landed the coveted meet in Lapeer County and in North Branch’s gymnasium. MHSPLA Board member and North Branch football coach Jeremy Ferman offered up North Branch for the competition.

“It was an awesome day and privilege for North Branch High School to host this special event,” said Ferman. “Many local athletes did very well. The top eight finishers in each division earn All-State recognition with first place declared State Champion.”

For the competition, 12 stations filled the gymnasium with a caller, official timer and two volunteers positioned at each end of the weight bar making sure the weight was correct and placed at the proper height for each lifter. Each athlete was also backed up by a coach behind them and two teammates or other lifters in place at each end of the bar to catch the bar and/or athlete if they were unable to lift the weight and get it back onto the rack safely. The stations faced packed bleachers full of students, parents and fans cheering on the competitors.

“Wow! It was packed house in the North Branch HS gymnasium Sunday!” said Ferman. “As a board member of the Michigan High School Powerlifting Association, I was honored to have our school host the MHSPLA Varsity State Championships. Our community, administrators, numerous volunteers (from NB and throughout the state) and the members of MHSPLA came together to create a safe, organized, successful event that enhanced the opportunity for each of the studentathletes to achieve their best. For many of them, this is their time of the year to compete and push the limits of personal success.

“Many people think the sport is all physical but ask the lifters, as with any sport the mental side of the sport is equally important. For me as a coach, teacher, and father, watching the young person’s (male or female) inner self-confidence strengthen and prosper as a result of getting physically stronger is priceless. That newly earned confidence is a result of hard work, dedication, and commitment. It helps them to conquer the daily challenges they face – in school, at home, and out in the community.”

When asked the importance of girls taking up power lifting as a sport, Roberts added, “Power Lifting builds self-confidence through hard work and dedication. Several of my girls are also straight-A students. They tell me that power lifting helps them focus, set goals and accomplish anything they set their mind to.”

Because there are 13 weight classes for the boys and 13 for the girls, we do not have space to run complete results. We will post those online at www.mihomepaper.com within our sports section.