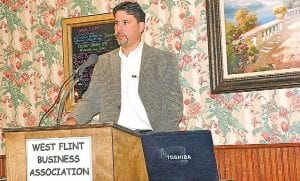 FLINT TWP. — Picture the empty slots remaining after all the chewing gum is removed from a package of Doublemint and there you have what inspired the late Jack Goggins to invent the patented Gumwrapper packaging system.

“If you have 2008 Chevy Malibu and you get in an accident and need a new hood, it is going to arrive to the bump shop in one of our boxes — in a Gumwrapper,” Valley said.

It may not sound like a big deal but NorthGate delivers to SPO an average of 12 to 30 truckloads of Gumwrappers daily – amassing so far about 85,000 consecutive on-time deliveries, he said.

Goggins who died in 2010 was Valley’s father-in-law. He founded the family-owned Security Packaging in 1984. The name was changed about a year and a half ago to reflect the companies broadening services beyond packaging to a full-fledged thirdparty logistics (3PL).

With about a half million-square-feet of space at three facilities including one on Dort Highway and one on Lapeer Road in Flint, NorthGate’s new name also reflects it location at the northern industrial gateway of the Great Lakes into Canada.

“Our idea is that a lot of the goods that transfer to and from Canada through this corridor are good prospects for us to expand our service offering to,” Valley said.

NorthGate also is part of the new Bishop Airport Aerotropolis formed to attract new business along the I-60 corridor into Port Huron and Canada.

“Our model will extend to other things beyond automotive but right now we are an automotive supplier – 100 percent,” Valley said.

NorthGate currently has about 200 employees including 24 recent hires for the Dort Highway facility.