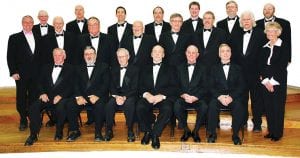 Members of The Norton Male Chorus.

FLINT — The year was 1921. It was the Roaring Twenties, a time of great American prosperity and cultural significance, when the Buick Factory was cranking out thousands of luxury vehicles and several local guys who liked to sing formed a group called the Buick Male Chorus.

Ninety years later, the Buick Factory is razed and gone but the singing group formed under its auspices still is going strong. Now called the Norton Male Chorus, after its founding director W.W. Norton, the group will celebrate 90 years of singing with a spring concert, at 6 p.m. May 14 at the Court Street United Methodist Church, 225 W. Court St. Free will donations will be accepted.

They are always looking for new members to keep the tradition going. Part of its outreach is to help develop singers who enjoy performing live music. More information can be found on its website at www.nortonchorus.tripod.com/home.html.

Also performing at the May 14 concert will be Matthew Mitchell, age 21, the 2011 winner of the $1,500 Guy L. Stoppert Music Scholarship awarded annually by the Chorus to a male vocal student at Mott Community College or the University of Michigan- Flint. Stoppert was a chorus member who also served as executive secretary of the Associated Male Chorus of America from 1945-1965 and edited its quarterly publication, the “Keynote.”

Mitchell is a senior at UM-Flint, who wants to compose, direct and teach music. He is a graduate of Swartz Creek High School but now lives in Fenton.

Concert attendees will hear a sample of Norton’s repertoire of patriotic, religious, pop and show tunes including old standards like “The Star Spangled Banner,” “God Bless America,” “He Ain’t Heavy, He’s My Brother,” and “Bridge Over Troubled Waters.”

As part of its 90th celebration, the group is sharing some of its history and highlights.

In 1923, its name changed from the Buick Male Chorus to the I.M.A. Glee Club, sponsored by the Industrial Mutual Association. The chorus became an independent organization in 1939 and took its current name.

W.W. Norton directed the chorus from its founding until 1951 when he moved to California, leaving behind an illustrious legacy including having been conductor of the Flint Symphony Orchestra, the Flint Choral Club and the Flint Civic Opera; executive of the Flint Community Music Association for 28 years; and coordinator of music for Flint Community Schools from 1921 to 1948. He also developed a cappella choirs at Flint Central High School and once operated 22 grade-school orchestras in Flint.

One of only four directors in the history of the chorus, Norton passed the baton on to Arthur McCombie, 1951 through 1980; C.L. Bergman, 1980 through 1993; and Hill, 1994 through the present. The latter three were members of the chorus before accepting the directorship.

In Ann Arbor, one of the tenors once dressed in “drag” to sing soprano obbligato for an operatic number. Another time in Cleveland, the announcer forgot the chorus was singing two songs, forcing them to wait on the risers while the mayor did his long-winded political/welcome speech.

In Fond du Lac, the chorus did an impromptu concert on the train platform at 2 o’clock in the morning. And nobody missed a beat while singing “The Creation,’’ in Minneapolis when an electrician misread his instructions and turned off all the lights so that nobody could see the conductor or anything else.

The New York City performance at the 1964 World’s Fair on Long Island, was outdoors so close to the airport that jets flying overhead contributed a disharmonious accompaniment. Another time in New York, a hotel would not admit the chorus’ one black singer so the entire group moved to a more open-minded establishment.

The Norton Male Chorus is a member of the Great Lakes Male Chorus Association and other Michigan district affiliations. Practices are held from 7-9:30 p.m. on Wednesday at Southwestern Academy.