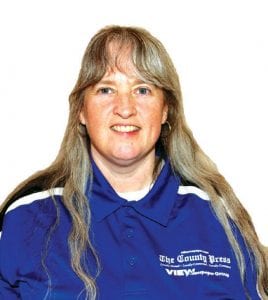 It’s been really hard for me to engage in the high school sports over the past couple weeks. Football playoffs, volleyball districts and state cross country meets have put the athletes in the spotlight, and deservedly so.

Also in the spotlight in our sister paper the Swartz Creek View, our own Dan Nilsen wrote a very personal story about a 17-year-old Swartz Creek football player – Zach Medemar — who is battling renal cell carcinoma for the second time. It’s a must read and you can get a copy online at www.mihomepaper.com/www.mihomepaper.com, then click on Swartz Creek View. It ran in our Oct. 30 edition. It’s a feel-good piece, but realistic about what could happen down the road. However, Medemar and his family choose to concentrate on the here and now and how his teammates have created a support system not unlike ones we have seen at other schools. It’s inspiring and gut wrenching at the same time. No parent ever hopes to have to endure the kinds of things Medemar and his family have had to endure. It’s also a wake-up call for all of us to step back and really take note of what is important on a daily basis. Far too often we get wrapped up in the ridiculousness of what we all perceive to be big deals. In retrospect, it’s all just mindless crap that really doesn’t matter in the grand scheme of things.

Another story that tugged at my heart strings and that has played out over the past several weeks is the story of Lauren Hill, a freshman at Mount St. Joseph University in Cincinnati. Hill, 19, is dying from Diffuse Intrinsic Pontine Glioma, an incurable brain tumor. Hill was diagnosed last November just after she committed to MSJ. The college has embraced her and moved up the game on Sunday against Hiram College by two weeks to let Hill live out her final dream of playing on a collegiate basketball team. They even surprised Hill with a special uniform for the day, gray instead of the usual blue and gold, to signify the color for brain cancer awareness. Hill was allowed into the game for two special plays and scored the opening point and the final point of the game, which MSJ won 66-55. In a facility that normally seats 50-100 people on a typical game day, Nov. 2, 10,250 were in attendance, including pro WNBA, NFL, NBA players and coaches. Of special note was former Tennessee women’s coach Pat Summitt who finished out her 38-year career after being diagnosed with early onset Alzheimer’s in 2011. She presented Hill with the Pat Summitt Most Courageous Award at halftime in front of a very teary-eyed crowd. LeBron James tweeted out a message to Hill and told her to expect a package from him. The message said: “You are simply and truly “AMAZING” Lauren Hill!!! Thank you for inspiring me and I’ll try my best to match you! Congrats on your game. Also be looking out for a package from I to You! You’re Awesome!!!

Hill has become a hero to many and on Nov. 6 was surprised to learn she had made the front of the box of Wheaties in her MSJ uniform dribbling the basketball. I still can’t watch all the footage without getting choked up. How do you not be afraid to die at the tender age of 19? Courageous beyond words. If you haven’t seen the stories and online footage, you should sit your entire family down and watch and read.

I realize there isn’t much we can do for Lauren or Zach, or the countless others like them battling whatever disease, but I challenge every high school in our coverage areas to tack up a No. 22 basketball jersey signed by the team and coaches in honor of Lauren and hold a fundraising day in her name. Take a photo for me and then send the donation to her charity. I’ll post every photo you send me in the paper as our overall show of support for all the courageous young people facing similar battles. Because in the end, if you don’t’ have hope, you don’t have anything.