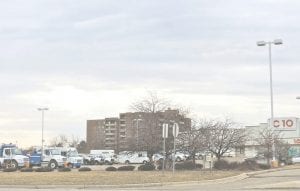 NOW SHOWING – After sitting vacant for nearly 10 years, the parking lot at the old Cinema 10 movie theater, 4425 Lennon Road, has been a beehive of activity for the past month or so, but that is not a sign of coming attractions at the long-idle property. Around the clock, several Consumers’ Energy trucks and equipment are filling about half of the parking lot, which is just north of Genesee Valley Center mall. Consumers is using the lot as a staging area for projects they are working on in the area and should be gone by the end of April, according to Tracey Tucker, Flint Township building director. Cinema 10 opened in 1997 and closed in October 2007.