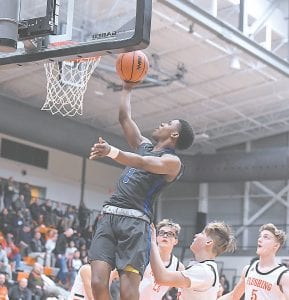 Carman-Ainsworth’s Jayden Nunn, shown here laying the ball up against Flushing earlier this season, sank a three-pointer at the buzzer to defeat Saginaw on the road last Friday. Photo by Todd Boone

The Cavs jumped to a 38-26 lead by halftime before Saginaw battled back to tie the game in the final seconds.

Isaiah Jones scored a team-high 18 points, while Nunn added 17. As a team, Carman-Ainsworth shot 24-for-27 from the free-throw line.

The win moves the Cavaliers to 15-5 overall and 6-2 in the Saginaw Valley League-Blue.

The Div. 1 state playoffs start Monday for Carman-Ainsworth, as the Cavs take on Saginaw Heritage (9-9) at 7 p.m. in the first round of districts at Flushing High School. The winner moves on to Wednesday’s semifinals against Saginaw Arthur Hill (11-9) at 5:30 p.m.

The two remaining teams will play in the district championship game on Friday, March 13 at 6 p.m. All games will be played at Flushing High School.

Carman-Ainsworth is seen as the heavy favorite to win the district crown with the best overall record and a 5-0 record against district foes throughout the regular season. The Cavs defeated its first-round opponent Heritage 66-63 on the road back on Jan. 14, topped Arthur Hill 81-65 at home on Feb. 6 and beat Flushing 62-47 on the road on Feb. 24. Carman-Ainsworth is 2-0 against Saginaw this season, defeating the Trojans on the road 72-64 on Dec. 20 in addition to last Friday’s victory.