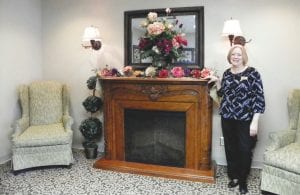 Lorry Burley, adminstrator at Kith Haven nursing home, shows off the lobby decorated to offer a cozy “old Chicago Hotel” style for guests and residents. Established in 1970, Kith Haven has recently achieved a five-star rating as a medical care facility.

Similarly, a nursing home facility with a five-star rating is a sign of top-notch medical care.

So the celebration going on is understandable at Kith Haven nursing home, G-1069 Ballenger Hwy. which recently received its first overall five-star rating. The rating is by the federal government’s Centers for Medicare & Medicaid Services and based on ongoing assessments of health inspections, nurse staffing, and quality of medical care. Star ratings range from one- to five stars with more stars indicating higher quality.

“It is pretty much the gold standard for our industry,’’ said Lorry Burley, Kith Haven’s administrator since 2007. She added that ratings are based on data regularly required to be reported to the state.

“It is very difficult to achieve and we have worked extremely hard,’’ Burley said. “It shows that there are some good things happening here in Genesee County.”

Serving the community since 1970, Kith Haven suffered a decline in its reputation as time went by.

“Nursing homes tend to get a bad rap,’’ Burley said. Public perception often is not favorable, she added, calling her job the most difficult but also the most rewarding she has ever done.

Kith Haven rose from a one-star to a two-star to a three-star rating then dropped back to a two before rising to a four-star and finally a five-star rating just before Christmas.

“It’s been a very long road,’’ Burley said, attributing the achievement to a dedicated staff committed to a common goal of excellence. Operations have stabilized and improved tremendously since the return of the director of nursing who has worked there for 18 years but left for a while, she said. Burley also praised her entire staff -including social workers, dietary aides and other administrators — as “some of the best workers in the industry.”

The five-star rating communicates to the public that conditions at Kith Haven are measuring up to medicare standards she said. The three-story, 159-bed care facility offers short- and long-term care.

“You have to earn it (the top rating), it is not handed out to everyone,’’ Burley said.

But she acknowledges there is always room for improvement. Ratings data is updated monthly but Burley said she does not expect the five-star rating to be subject to change for at least a year.

Besides meeting the medicare standards, the staff is also attentive to residents needs.

For example, they are planning a special Valentine’s Day supper for married residents. Some of the couples live at Kith Haven and some have spouses in the community but going out for a private dinner is not an option for them.

Generally, attention has been paid to the decor and ambiance of Kith Haven which has been updated in an effort restore its original “old Chicago-hotel look’’ with a fireplace in the front lobby and other warm touches established by the facilities founders that made Kith Haven attractive.

“It (Kith Haven) stumbled but it’s back and a good place to be,’’ Burley said. “I get a very favorable ‘wow’ when people come in.”